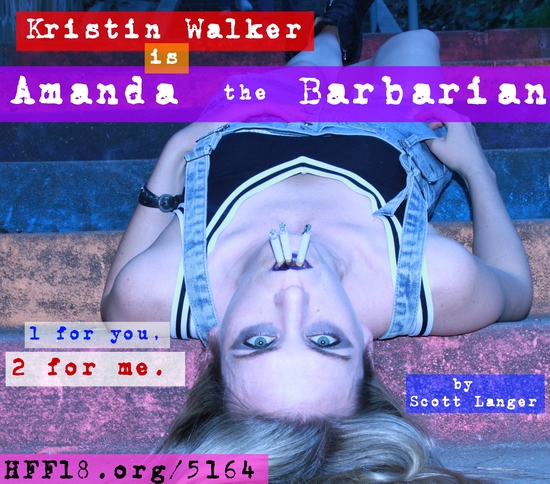 Scott Langer’s Fringe premiere at The Complex Hollywood attempts to blur the line between stage and reality by creating a story of a “superstar in her own head” actress with no time for rules – professional or otherwise.

Amanda (Kristin Walker) is rehearsing a new play with an unfortunate co-star (Langer) who scrambles to get the story back on track when Amanda decides to improv things to keep her own interest. This relationship quickly bleeds into their real lives, with Amanda titillating and confusing both her co-star and her current girlfriend (Frankie Jarvis). Throughout it all, her director (Richard Reich) is derided and dismissed to the point of interrupting his own opening night and barging onstage.

The realistic apartment settings work well from a story perspective but take so long to shift between scenes (and with no music to cover the changes) that the show begins to drag after a scene or two. And while Amanda the Barbarian certainly seems like it should be about the titular character, the focus of sympathy was often her co-star, mostly because of what Amanda was putting him through. But the concept of blurring reality and theatre is a strong one that Amanda the Barbarian incorporates in a unique way.