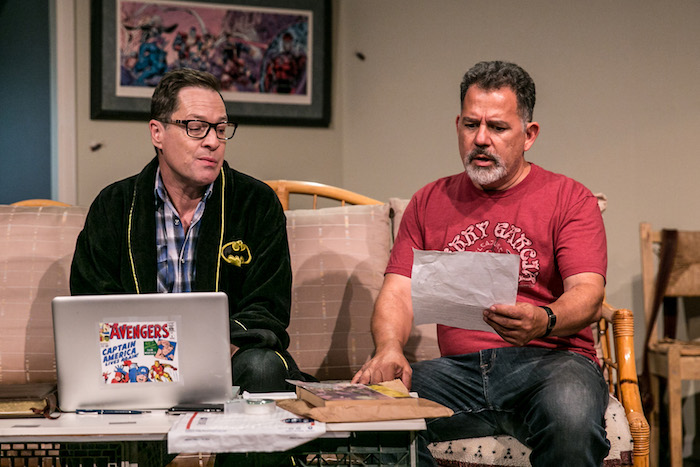 In a superb simplicity, the writing, the acting, the space, the dynamic tension, moral compass and of-the-day reasoning come into play with a hyper-real, perfect synergy.

In an attempt to save his dying business, used books dealer Edmund (Stewart) and friend Shep (Apostolina) concoct a risky scheme to steal rare books from Thomas (Nagle), his competitor’s home.  But when they carry out the plan, they accidentally discover a mind-blowing, depraved secret about Thomas, that no one could have imagined, and they are forced to decide if justice means taking action on the truth or doing nothing in order to protect the innocent.

There is a definitive ‘thriller’ element to this play which is immediately set by an eerie, vignette between an older man and a young woman (Emily Goss) whose name we come to know as Rosalind, and being almost forcefully tutored in classical literature.  It’s a delicious and oddly curious scene when placed side by side with scenes of Edmund’s dilemma about his own survival and Shep’s humorously extraverted solutions.

What is absolutely astounding here is how the actors in this production powerfully fill the literal and metaphysical space without clutter. The profundity of the scenario, the carefully placed, identifiable literary references, the environment itself, fully permit the players to act with an edge-of-your-seat, fluid, alacrity right to the last moment.

French Stewart brings a whole other level of humanity to this production. His performance is so multi-layered, so empathetic, sitting in the audience is in fact, sitting in the room, deeply embedded in the action and emotion.

Nagle as the villain, takes over the entire stage with such power and absolute stillness that the psyche of the character is perceptually normalized to a frightening degree.

Apostolina is the surprise in this story with surface comedy underlined by vivid motivation and clear cut action to right what’s wrong.

Emily Goss is intelligent and riveting creating a triumphant turnabout at the finale that is so juicy one can’t help but remark about the villain, “He must be proud. He taught her well.”

Forever Bound was developed at The Road Theatre and Antaeus Playwrights Lab.