Shakespeare without the language?…134 West’s ‘Macbeth’ 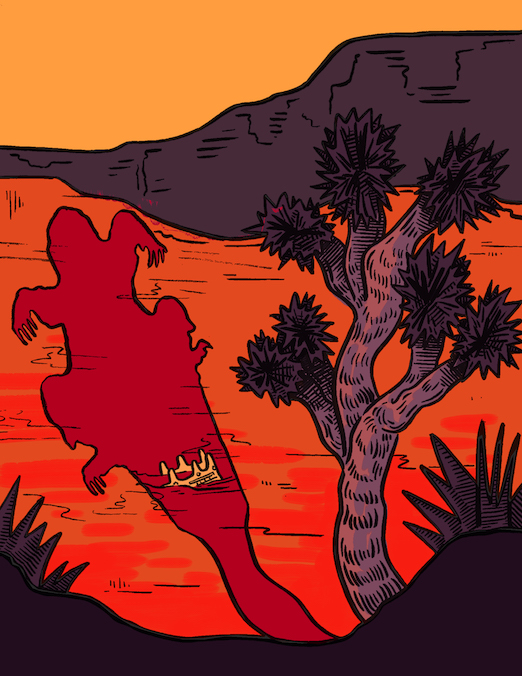 The set design by Courtney Dusenberry, light design by Adam Roy, and music and sound design by Tyler Western and Jeremiah Pfleiger in 134 West’s production of Macbeth are fabulous. What looks like an Arizona desert with a gorgeous photo scrim of far-off mountains and blue sky in the center, giant cactus-like trees scattered throughout, and gorgeous colors provide an atmosphere to the play that feels barren, dry, and lifeless.

Unfortunately, so does the acting and directing.

In her Director’s Note, Alyssa Escalante writes about ambition, she writes about being brave enough to do the piece, and she “worries if she truly understands” Macbeth. And while I applaud artists tackling pieces head-on, based on the performance, she and her cast have a lot to learn.

Neither the actors nor the director fully understood the language in Macbeth. Words are mispronounced, character motive is ignored, and lines are broken apart, either to be artistic and “do something new” which changes the meaning or because they simply don’t understand what they are talking about.

There is only one thing that matters in Shakespeare: the language.

The actors stand around slouching with their hands in their pockets and doing as much TV acting as possible in the hopes that a CW casting associate is in the audience. None of them use the language, there are pauses that linger for ages, the meanings of scenes are misunderstood, and it adds up to a giant bore.

The show is apparently set in the future in a deserted wasteland. Fine. But the story is about a class structure that has a king, which means reverence, which means you must CREATE a society in this wasteland that has a power structure. But no – everyone seems to just be cool with everybody else hanging around. Macduff’s discovery of the murder of King Duncan is so slow and muted it’s as if her grandfather had just passed after two months of illness rather than the real society-shaking, God-forsaking violence that it is. Lack of tension and of conflict makes every scene fall flat.

The one very cool image at the top of the show is that the three witches appear as shadows in the clouds. Neat. Except that the actual dialogue describes them as looking “not like th’ inhabitants o’ th’ Earth and yet are on it.” But they’re not. Later, they disappear into the air – “and what seemed corporal melted as breath into the wind.” They never seemed corporal … they were shadowy representations.