Charlie and The Chocolate Factory at the Pantages Hollywood: Feels Like a ‘Speed Through’ But Hits The Mark 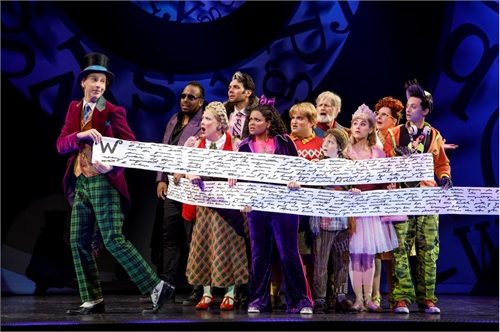 By Tracey Paleo, Gia On The Move

If you were hoping for the iconic, 1971 movie version Gene Wilder candy man who frighteningly taxis around a bunch of bratty kids and their hopelessly bullied parents through his über factory, resplendent with creepy Oompa Loompas tunefully toe-stepping as they admonish horrible children and their progenitors, gobs and gobs of unimaginable sweet comestibles, the fantastical, shock-inducing settings, or real surprises of any kind…or least of all, a naïve little Charlie, completely awed by the world of Wonka…kiss that dream goodbye.

Charlie and the Chocolate Factory currently playing at The Pantages Theatre, Hollywood, aims to present a more modern, sped up, bombast for today’s audiences and it does a fairly good job of it…to a point.

Overall, it is a standard, musical theater pleaser. Spirited, fast-moving, colorful with an added bit of updated techno and plenty comedy. But there are more than a few obstacles in this production. Although, I suspect theater-goers are not going to either be able to pick them out, or care, or will choose to overlook them for the overall experience, which really is terrific. Unless of course, you are a die-hard Willie Wonka fan and cherish the much more sophisticated storytelling and messaging of the original book and movie with the exception of Veruca Salt whose bit adheres to the book, not the film. But really, it’s a night of tremendous fun. I’d honestly say, just go with it.

There is the issue of the casting. Mini-singing-powerhouse Charlie Bucket (Rueby Wood on opening night), is the only real child in the production. The rest of the children are (wonderfully talented) adults cast as close as possible except for a gluttonous Augustus Gloop (Matt Wood) who especially stands out as the obvious adult-dressed-up-as-child gag. If it’s not intentional, it’s what reads from the seats. And I wouldn’t mention it had it not been for the woman sitting next to me who continually brought it up (asking ‘why?’). Jessica Cohen who plays Veruca Salt is voracious in all her spoileddom, pushing her way through everyone in pointe shoes and fur, and demanding everything she sees. Violet Beauregarde (Brynn Williams) is still the world-record hopeful gum chewer but now transformed into a social media celebrity complete with paparazzi, brand manager, father-in-tow. Alas, Mike Teavee (Daniel Quadrino) is now an anti-social, ADHD sarcastic, wannabe malcontent although still larger than life addicted to television. And Charlie…sigh…has traded his pure guilelessness, the magical quality, unfortunately, lost in this production, that made him entirely special from the group, for smart inventor ingenuity.

The first act is dedicated almost entirely to presenting each of the ticket winners instead of getting to the factory right away which leaves the second act no choice but to hurl to the OMG-Charlie-you-won!-finale without much more precedent as to why he’s done better than the other kids, except not doing anything stupid like falling into a chocolate river and getting painfully sucked through a tube.

Noah Weisberg as Willie Wonka plays his role to perfection and actually better than that. Weisberg’s enthusiasm, timing and delivery go a long way to pull in the high marks for this presentation overall. The surprise Oompa Loompa dance extravaganza is the ‘spectacular spectacular’ of the night.

Directed by Jack O’Brien, Charlie and the Chocolate Factory is a bit more salty/sweet than tearjerker gratifying. But it mostly hits its high points and is an entertaining night at the theater. Much more for kids or at least the kid in all of us.