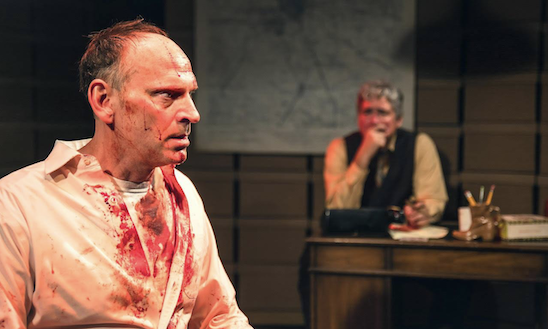 Christian Levatino’s Black Bag Pentalogy is a series of five dark comedies that “hold a magnifying glass to five very distinct moments in American history between 1954 and 1972.” The first three plays in the pentalogy – Sunny Afternoon, King Dick, and …meantime at HoJos – are being performed in rep at the Complex Theatres (Flight Theatre 6476 Santa Monica Blvd.) this month in a mad orgy of theatre billed as The Big Event. The title underplays not only the amount of effort required to produce three plays and perform them all back-to-back on Sundays (with a Double Feature on Saturday and a solo offering on Friday), but the magnitude of the productions.

Sunny Afternoon, the first in the batch, tells the story of Lee Harvey Oswald’s interrogation moments after President Kennedy is killed in Texas. We’re allowed to eavesdrop on the conversations had in Dallas Homicide Captain Will Fritz’s office, with his deputies, his boss, the Secret Service and F.B.I., and Oswald himself. Levatino has not only done his homework on these historically based plays, but he is a master of dialogue, pacing, and structure. The production is cinematic in its staging and direction, especially by Darrett Sanders (Captain Fritz and producer of The Big Event) who steals the show with an effortless and stunningly true performance. The entire cast nails tone and character, a testament not only to the writing and direction, but to very smart casting.

Many shows use multi-media these days to varying effect, but Sunny Afternoon (indeed, all of The Big Event) uses newsreels and decade-appropriate music subtly, enhancing and informing the audience just enough to not pull them out of the world of 1963. The set, walls of brown filing boxes, works perfectly for all three productions, offering a blank canvas but texturizing it with the insinuation of piled evidence, crucial to all three plays.

While the cast is across-the-board stellar, John F. Fuson’s Chief Curry adds a bluster of high-blood pressure and immediacy to the situation, Spencer Cantrell’s Bill Alexander and Sammie Wayne’s Clarence ooze Texas smoothness, and Levatino is gloriously fun as the seemingly dim-witted but prescient Elmer Boyd. Andy Hirsch is a perfectly peaked Oswald, frustrating the officials and enjoying every minute of it.

Sunny Afternoon is a hard-hitting dark comedy well worth basking in.
Written and directed by Christian Levatino

October 26 – December 2, Fridays at 8pm and Sundays at 3pm
(*no shows Thanksgiving weekend)

Photo (above) by Alex Hathaway: Jeff Doba and Darret Sanders