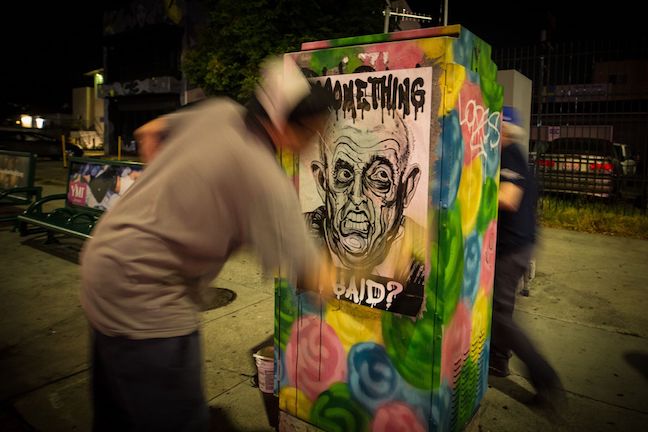 Track 16 will present Robbie Conal’s Cabinet of Horrors in a series of satirical portraits of Donald Trump, members of his cabinet, and inner circle – painted in Conal’s signature black and white style, each with a blazon of biting text. 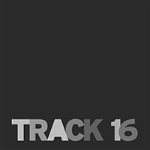 Exhibition opens on Saturday, October 13, in time for the midterm elections.

Almost two dozen of these scathing paintings will be exhibited with plenty of Trump gold and other pompous decor. The cast of characters depicted will include Trump himself, making an appearance in the Hammer and Pickle painting, a piece that has been printed and wheat pasted on utility boxes and walls from D.C. to DTLA. Other subjects will be official cabinet members, like Secretary of Education Betsy DeVos, and Trump’s most trusted advisors, like Rudy Giuliani.

“…when I discovered Robbie Conal’s art I realized that his work powerfully coalesced the elements of traditional painting, political commentary, humor, bold design, and defiant intervention in public space. I was blown away because Robbie had fused everything I was excited about and I now had a model in art.”

Conal is one of the most cutting political commentators of our time. During many pivotal events of history, whether it be the Iran-Contra affair, the Lewinsky scandal, or Bush’s Iraq War, Conal expressed his dissent through spates of artworks that are printed and plastered across America, but no series has ever mushroomed so relentlessly as the Cabinet of Horrors. 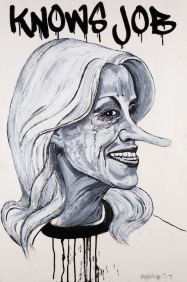 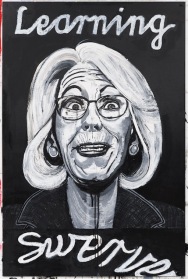 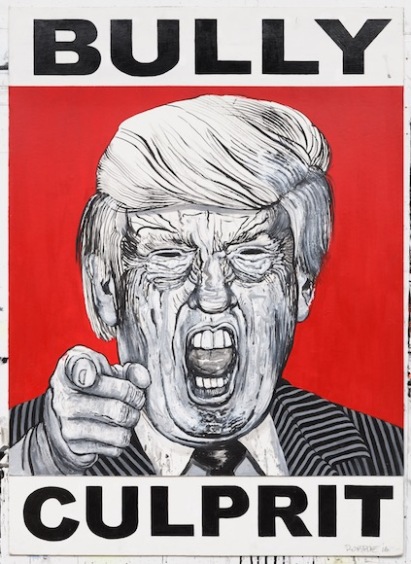 In 1986, angered by the Reagan Administration’s rabid abuse of political power in the name of representative democracy, Conal set aside his training in abstract expressionism and began making black and white, unflattering, satirical oil portraits of politicians and bureaucrats, starting his first public art project, Men With No Lips. The paintings of Ronald Reagan and his cabinet pushed Conal to take his art to the streets. Raised by parents who were union organizers, Conal was well versed in political protest. Responding to the inadequate reach of gallery walls, Conal developed an irregular guerrilla army of volunteers who helped him poster the streets of major cities around the country. In “Guerrilla Etiquette + Postering Techniques” Conal explains that the work is for “the general public who feel they have no avenues of resistance to the dominant power structure, no community support system, no ability to change their situation.”

Over the past 35 years, Conal has made more than 100 street posters satirizing politicians of all stripes, televangelists, the news and entertainment media, and global capitalists. With his unique brand of humor and insight, he has also taken on subjects like censorship, war, social injustice, and environmental issues.

“His [Conal] art is outrageous, unsparing, and constitutes a welcome offering to the struggles of Americans against war and injustice . . . his art is therefore to be celebrated by all who see the marriage of art and politics as playing a vital role in the movement toward a just society.”

—Howard Zinn, author of The People’s History of the United States

The Washington Post has called Conal “America’s foremost street artist.” His work has been featured on CBS This Morning, and in Time, Newsweek, The New York Times, Los Angeles Times, The Wall Street Journal, The Nation, Vanity Fair, and People magazine. He has also appeared online numerous times in The Huffington Post, TYT Network’s The Point and on MOCAtv’s arts channel. He has received a National Endowment for the Arts Individual Artist Grant, a Getty Individual Artist Grant and a Los Angeles Cultural Affairs Individual Artist’s Grant (COLA). Conal received an MFA degree from Stanford University in 1978. He taught painting and drawing at the University of Southern California’s Roski School of Fine Arts for 12 years.

His works are included in the collections of many museums including: