Something Truly Monstrous at the Blank Theatre 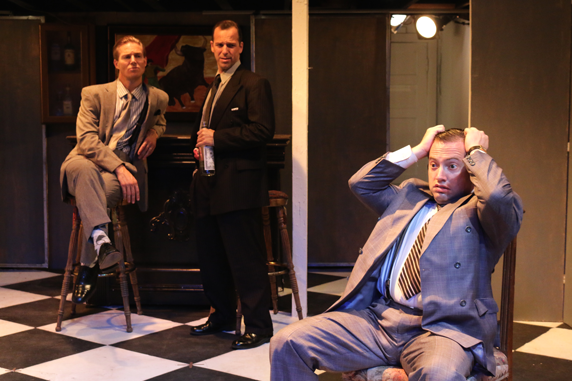 “Now I wonder how much of it is true.”

After receiving a brief note from another patron about Something Truly Monstrous, at The Blank Theatre on Hollywood Row, searching for some actual historical context of Peter Lorre and Humphrey Bogart pranking Errol Flynn with John Barrymore’s dead body, became a mini-challenge.  Several things that must be said about this play. First there are few reports that loosely attempt to attribute some validity to the premise – books and websites that reference most likely Paul Henreid’s account in his biography, some from Errol Flynn which are hard to find and still dubiously add up to this most likely being a fiction.

One of them relates that, indeed, Lorre, Bogart and Henried were in fact shooting Casablanca at the time.  And when the word got around on the Casablanca set that John Barrymore had died Peter Lorre was apparently inspired to think of the lugubrious high jinks of  bribing the undertaker to borrow his body. Lorre, Bogart, Henried and two others (according to Henreid’s account) sat Barrymore’s body in a chair in Errol Flynn’s living room where Barrymore always used to sit. Flynn entered, nodded at Barrymore and strode towards the bar….then he froze. “All right you bastards come on out.”  Flynn then offered the offenders a drink but wouldn’t help them take the body back.

The other (that I came across) describes Lorre making a successful drive to Jack Warner’s house.

Either way, true or not it is a pretty juicy and rather hilarious plot, so easily believable merely because it concerns the founder and original leader of Hollywood’s renowned Rat Pack (Bogart) known for the kind of pranksterism that would inspire such a story. And it is peppered with at least the one truism of Bogart’s 3rd wife in a jealous rage stabbing him with a kitchen knife.

Second, another play written by Jeff Tabnick called Barrymore’s Body premiered at the New York Fringe Festival back in 2004 which is written as a verbatim description to this show.  There was no notation in the program for it, and as Something Truly Monstrous is billed as a world premiere it is curious indeed.

Frankly, however, minus, the lack of notations, the play itself is pretty stupendous. From the moment actor Jason Paul Field (Humphrey Bogart) arrogantly walks onto the Casablanca set, he is a hilariously sardonic, believable copy of wealthy kid turned stage then cinema actor who often wore his own suits in his films (Warner Bros. costume department was incredibly cheap).

Jilon Vanover as Paul Henried is also played picture perfectly as a German émigré actor keeping his background close to the vest with the second World War in play.

But it is Amir Levi as Peter Lorre that brings this show to a level of over-the-top hysteria and outlandish dark comedy that only Levi could.  Not quite a ringer for Lorre, but almost, Levi embodies the Austro-Hungarian born, international sensation who after a career on stage and then German film, eventual became a regular Hollywood crime and mystery featured player – although according to this play – to his dismay.

There are so many brilliantly nuanced moments and so much personification of Lorre, that Levi has internalized within himself, that it is difficult to discriminate the actor from the man and therein lies the exemplary brilliance of the character actualized.  The audience is given the opportunity to believably and utterly step into the heightened world of the play.