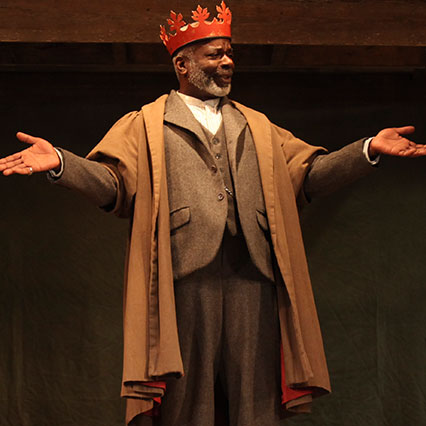 When I think about Shakespeare, I imagine that during his time, he might have  produced a perfect play with a company such as the modern Globe Theatre now touring and having recently made an appearance at the Broad Stage in Santa Monica.  It is probably the closest and most authentic I’ll experience to true Elizabethan stage.  This cast was so very deft with every aspect of this production, every word, piece of music, physical movement and breath. It was an immersion like none other which kept my attention for almost 3 hours. And yet, except for the final moments at Cordelia’s death, I was oddly unmoved.

The Tragedy of King Lear is based on the legend of Leir of Britain, a mythological pre-Roman Celtic King, regarded as one of Shakespeare’s supreme character and writing achievements with the title role coveted by many of the world’s most accomplished actors.  As we have come to know him today, Lear is a fearsome, powerful, largely reactive emotional man and a king to boot. He is ruthless, raw, unrefined in too many ways, even cruel and prone to favoritism on a whim as he proves in the beginning of this play.

As a way to exercise a show of it, in a most ego-centric theatricality, he forces his elder daughters to practically beg at his feet by professing,  a love he knows they don’t have for him, in a couched contest against his beloved youngest daughter, Cordelia, who he intends the best portion of his kingdom all along.  What results in a sharp and vengeful turn of events, is the utter dissolution of his power, his sanity and his life as well as all his children, even his friends.  In fact, pretty much no one gets out of this story unharmed or untainted.

This wasn’t the most robust Lear I’ve experienced.  The entire cast is endowed with an extraordinary level of technical prowess in the genre, with the text, the delivery, range and vocal power.  But Lear seemed to be acting all by himself, so much so, directing all emotion and action outward to the audience, that he left the rest of the cast to interact with each other, apace and apart. And so I found it difficult to really connect.  Not to mention his behavior was rather less imbued with bravado or eventual madness as opposed to jovial silliness and possible confusion.  It just wasn’t appealing in a way that I’d hoped, although still effective.  But that is as far as it went.

As for the rest of this production however, it is magnificent. The language is crystal clear.  The interludes wonderfully surprising.  The multiple character changes by the cast members, exciting.  In short, for any faults at all, the craft made exquisite.

So if you have had any complaints or shyness with Shakespeare before, about following the text, understanding intention, or being utterly confused for lack of aptitude with the language, there is unconditionally no danger of that; certainly not in this production.  Not a moment is ever lost.  And no distraction of any sort of bells & whistles.  Finally, a purity for true-believers.

The only real drawback is the attention span of American audiences which may find it difficult to sit through the length of the play.  But it’s a given that if you are going to hear a language play, it is an investment in time.

Alas, this was a short run and there are unfortunately no more performances left.

King Lear
By William Shakespeare
Performed by Shakespeare’s Globe
Touring the UK and US on a small-scale, Elizabethan-style stage.