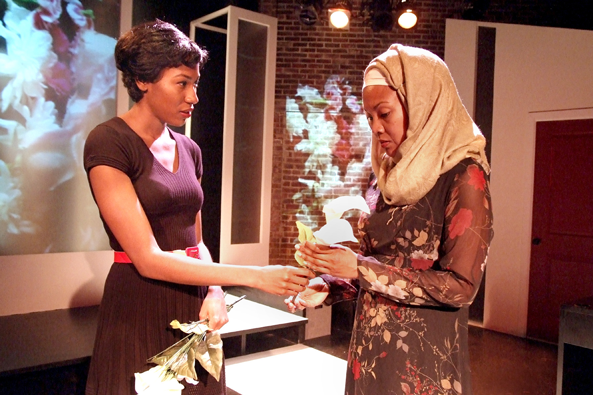 It is capable of responding to almost limitless varieties of human touch, producing sounds ranging in volume from thunder to a whisper… (~a piano and it’s keys)

There has been death all around and yet life waiting to happen, if only they will let it. Luckily for this family, there is hope.

Julia Dolan (Diarra Kilpatrick) is an up-and-coming corporate attorney whose carefully constructed life begins to crumble when she learns she has a half-sister Neyla (Yvonne Huff) – a Muslim who has fled Iraq.  Young Neyla plays the violin and wants to audition for Julliard.  Their father Charlie (Brent Jennings) is foisting the shocking secret and responsibility of Neyla’s care on his American daughter while opening the door to his newly-found-on-Facebook Iraqi daughter without question.  The truth unfolds uncomfortably and angrily.

Closely Related Keys currently a world premiere at the Lounge Theatre, Hollywood, is supposed to be a story about family conflict and clashing cultures examining the walls we erect in our current climate of racial, religious, moral and political polarization.

In some way it is much more a story about similarities.  The title itself, Closely Related Keys, is actually a musical reference which means,  “To share many common tones.” Indeed, the two sisters in this story are more alike than they realize.  They are both very strong willed young women.  Both are very angry.  Both resentful of their father.  Both hiding a secret relationship.  They are also very loving in ways that surprise themselves. Both have suffered horrific loss — losing their respective mothers to war and terrorism.  This moment is a chance for them to find closure, move on with a new  life, forgive and set themselves free.  It’s a chance to have the family denied them.

On the surface, of course Julia and Neyla are culturally and religiously different. How they find their connection is the universal exception – music.  Singing together, dancing around the apartment they discover that they truly are like two keys on a piano residing in different places on the scale but never-the-less able to create harmony.  It brings them together.  Most times though blame, pain and resentment get in the way, preventing Julia and Neyla from reaching accord. Their father’s overbearing plan of creating a new makeshift family backfires. Julia and Neyla rebel and their deep-seated issues of abandonment rise to the surface.   Charlie was a soldier during the Iraqi war who fell in love with another woman, Neyla’s mother.  He left his American family to be “happy” with his Iraqi family leaving Julia with her mother and as she believes, with only her mother’s love. When he eventually is forced to depart Iraq he in turn leaves Neyla to her mother alone, in violent circumstances.  Charlie is living with a lot of guilt over both families.  His desire is to make things right.

Closely Related Keys is somewhat loosely scripted.  The story occasionally feels incomplete and could use a bit more development.  Given the time allotted however, the production is very well played and emotionally under played by every actor including Ron (Ted Mattison), Julia’s lawyer boyfriend and Tariq (Adam Meir) Neyla’s husband. The exception is the explosive lead actress Diarra Kilpatrick, who is edgy from the moment the lights come up. Ms. Kilpatrick brings a veritable nuclear-bomb-waiting-to-drop energy to every scene, forcefully moving this story along to its conclusion; and a refreshing dose of vibrant dramatic stage craft. There are not many surprises in the storyline. The circumstances are extraordinary, including the fact of this being a female driven production. A lot of what happens is expected. But there is plenty of heart and hope.

Photo (above) by Ed Krieger: Diarra Kilpatrick and Yvonne Huff

One thought on “‘Closely Related Keys’ at the Lounge Theatre”