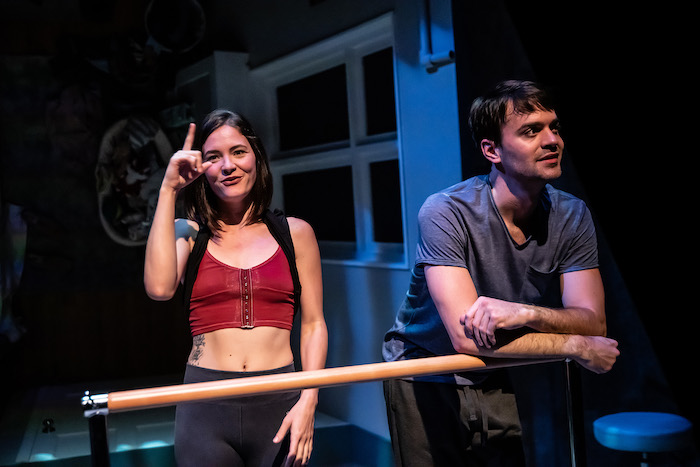 By Tracey Paleo, Gia On The Move

If it’s never occurred to you just how graphic sign language can be, I dare you right now to go out and ‘listen’ to it for yourself. And here’s an opportunity. At least, the very best you’ll get, immersed between audience and stageplay.

Deaf West (Spring Awakening) at Inner-City Arts, DTLA, has decided to dial up the intensity with its current American premiere of The Solid Life of Sugar Water, an intimate portrait of marriage, lovemaking (and…stress that!) and communication. Or rather, the lack of it in the aftermath of a tragedy. Yeah. That’s the soft version. Let’s get real…

Tony Award-winning playwright Jack Thorne has written a spirited eye-opener that, directed by Randee Trabitz with the additional adjustment to the original script of having not one, but both actors, deaf and sign, is so startling, it’s almost comical. And sometimes, it actually is.

In truth though, while there is plenty of awkward and silly boy-meets-girl romantic comedy during flashbacks of how the relationship began, this very dramatic depiction of a couple trying to readjust from a stillbirth, is dark and deeply thought-provoking, and not just because of the script. The language of silence highly punctuates every moment, every emotion, every action to a degree that would be difficult for an otherwise speaking-only cast to do.

This production is charged and energetic, performed through ASL (American Sign Language) along with two additional actors speaking aloud for hearing audiences, moving in the same intimate space with the couple in doubleganger-like action. You simultaneously hear and watch the combined words, physical movements and gestures of all four, to hear the story of only two, with a concentration on hands of course. For that is where the juicy stuff is even if you don’t understand.

I’ve regularly attended ASL productions in the last several years and it’s always a treat to sit in the audience and observe a specific form of communication that although foreign to most hearing individuals, myself included, resonates far louder than simple sound.

Strangely, in a way that pre-talkie movies did in the 1920s when audiences only had large, exaggerated physical expression through which to ‘hyper-feel’ rather than verbal dialog. And think about that for a moment. If you’ve ever seen a musically-led, black and white version of say, The Thief of Bagdad, The Shiek, The Passion of Joan of Arc or The Dumb Girl of Portici, do you recall how you reacted to this kind of medium? It’s different. It’s attention-holding. It’s definitely more intense.

In the case of The Solid Life of Sugar Water, it’s all about the sex – from beginning to end.

What it is, is beautifully raw. The supreme honesty of two people ‘speaking’ all that they cannot or will not say to each other most of the time. The graphic nature of human communication when there’s nowhere to hide.