Los Angeles revolutionaries WASI usher in a new movement of empowerment, inclusion, and self-love with their debut album Riot Pop out everywhere today. Pushing for change and acceptance, this record comes right in time to celebrate Pride Month. In addition to the release of their debut, the band will head out on the road for their Love is Gay tour starting June 10th where they’ll be working with LGBTQ youth centers around the country at every tour stop, meeting with kids in each city to talk to them about music, art and above all, spreading a message of pride and breaking down barriers.

To celebrate even further, the band will be DJing the Pride show at the tastemaker Los Angeles showcase night, School Night!

WASI’s anthemic and relatable music is deeply rooted in their experience as outsiders. They own their voice and draw equal influence from the rebellion of the Clash and the pop sensibilities of Tegan & Sara. Not only do they write songs about defiance and shaking up the system, they live it every day. At the helm of the band are newlyweds and human rights activists Jessie Meehan and Merilou Salazar. The group developed and produce the Women Fuck Shit Up Fest that takes place in both Los Angeles and D.C., an event for women to show off their art in a safe, free and empowering environment. Their activism reached new heights last year when they single-handedly got Walgreens to establish a nationwide bathroom discrimination policy.  The video is also currently on the ACLU website.

“It’s titled Riot Pop, which is WASI’s name for their brand of music, which mashes electro-pop, hip-hop, dance-punk, and garage-rock into a cocktail of self-affirmation and inclusivity. The band, founded by Buena Park natives (and now newlyweds) Merilou Salazar and Jessie Meehan, has become a beacon of positivity for youth whose identity, body type or politics has left them feeling as if they’re on the outside looking in.” –BUZZBANDS LA

This record explores themes of fear and isolation but balances that with messages of love and being comfortable in your own skin. “Riot Pop is the optimism we hold onto in the chaos of the world around us and in our heads,” says the band. They hope it will provide the same sense of security and reassurance to fans that they’ve found through their music.

“Like the rad, queer riot bands before them, this Los Angeles duo, comprised of Merilou Salazar and Jessie Meehan, is about more than just sick beats: it’s about using the emotive intensity of sound to rock the world into a better, more progressive future. “
–CURVE MAGAZINE

“WASI is a pop dream for woke grrrls.” – BUST 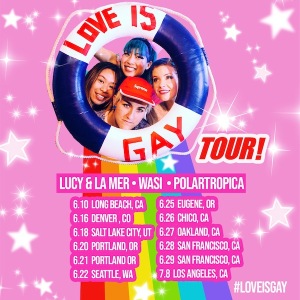