Australian Circus Company Circa U.S. Premiere ‘What Will Have Been’ at Santa Ana Sites 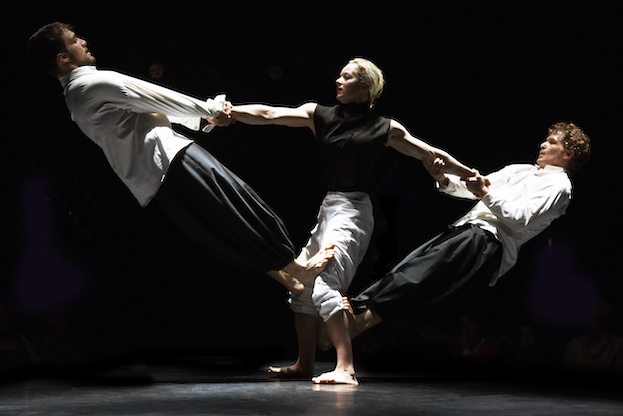 Santa Ana Sites, a program of Community Engagement, to stimulate positive social interaction in diverse communities through the arts, is pleased to present Sites #24 and the concluding concert of the ‘18-’19 season. The Australian based contemporary circus company, Circa U.S. will premiere What Will Have Been on Thursday, May 30 and Friday, 31 at 8 pm at The Yost Theater.

Following their U.S. premiere in Santa Ana, the ensemble makes their way to Spoleto Festival, the International Festival of Arts & Ideas, and, finally, the acclaimed season at Jacob’s Pillow Dance Festival.

Accompanied on stage by a live violinist and fusing together the music of Bach and spine-tingling electronica. Comprised of three fearless acrobats, What Will Have Been pushes the boundaries of contemporary circus and defies audience expectations.

Drawing their audiences deep into a world of physical daring, Circa is one of the world’s leading performance companies. From their base in Brisbane, Australia, Circa continues to blur lines and pioneer extreme physicality.

Under the direction of circus visionary Yaron Lifschitz, Circa features an ensemble of exceptional, multi-skilled circus artists. A regular fixture at leading festivals, Circa has been seen in New York, London, Berlin and Montreal with seasons at Brooklyn Academy of Music, The Barbican Centre, Les Nuits de Fourvière, Chamäleon Theatre as well as major Australian Festivals.

About Santa Ana Sites
Santa Ana Sites, founded by Allen Moon, is a community partnership presenting contemporary performance in public and private spaces throughout Downtown Santa Ana. What began as a listening party in Moon’s downtown loft has grown into an arts and entertainment movement that continues to push creative boundaries and attract world-class performers. Previous events include The National Theater of Scotland at the Empire Building, DakhaBrakha at the Yost Theatre, Roomful of Teeth at Church of the Messiah, Troker at the Frida Cinema, Ashley Bathgate at Underground DTSA, Bang On A Can All Stars at eSports Arena, Maya Beiser at Logan Creative, Ate9 Dance Company at the Santora, and Pacific Symphony & wild Up at Logan Creative. For more information on Santa Ana Sites visit http://www.santaanasites.com.
Santa Ana Sites is a program of Community Engagement. An organization to stimulate positive social interaction in diverse communities through innovative and socially motivated art practice.