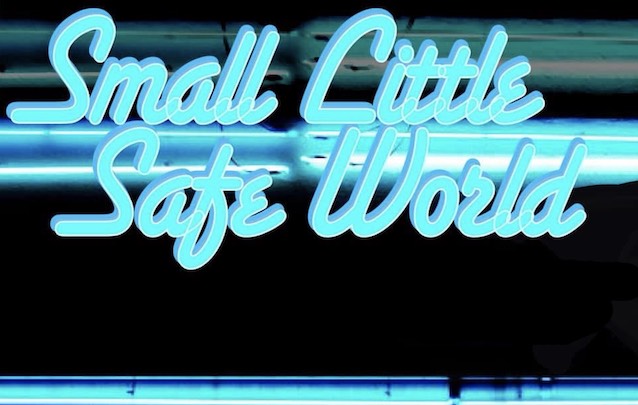 The easiest part of creating a play is writing the script. Don’t get me wrong – it is also the hardest part. Creating work from an idea takes long hours and months of work, refining and rewriting. It’s incredibly hard, especially if there is a deadline and the project needs to go into production at a set time. Conversely, if there is no set deadline, then you get the huge benefit of time. Time to refine, time to workshop, time to rewrite. Throwing out and reworking words on a page cost nothing but time. Productions cost money and time. And rushing an idea can lead to problems.

Ultimately, Small Little Safe World is a white male sex fantasy in which a young girl desperately wants an older man and corrupts him with her sinful ways until he is forced to turn her away and grow up. New-in-town twenty-one-year-old Erin (Julia Coulter) blatantly hits on forty-eight-year-old Dave (Pete Navis) employing no subtlety and practically hitting Dave over the head to invite her over to his place. After a date or three (of more exposition and backstory), Erin hands Dave a notebook where she has written a bunch of fantasies – she wants him to pick one and they’ll enact them when she comes back next week. Dave and chooses a story where he plays “Daddy,” calls Erin “Little Girl” and they go through father-daughter fantasies ending in sex. Every Thursday. All of this creepy incest roleplay is Erin’s idea, remember, and she has specific rules about how he must always treat her like his daughter.

Erin continues to “corrupt” the older man by not so subtly encouraging him to drink wine, even though he’s spent his life wisely avoiding alcohol since his father was an alcoholic. But he succumbs and starts to drink. A good start to a character downfall and conflict….. but no. Dave handles his drinking perfectly and now apparently just enjoys a glass of wine. Dave has a moment or two of “oh, hmm… I don’t know if this is a good idea” when Erin pretends to be a fourteen-year-old wanting to have sex with Daddy, but then he acquiesces and is totally fine with it. Over and over again. For all the father-daughter roleplay, not once does Dave act like a real father and question why 21-year-old Erin is obsessed with this particular fantasy or why she won’t engage in an adult relationship. Everything’s fine. It’s all extremely safe, theatrically speaking. No conflict, no stakes.

In fact, the final straw is when Erin tries to create conflict by destroying the only photo Dave has of his dead mother. But rather than entering conflict, Dave gives up and says “it’s over.” Of course, this leads to a shocking line about Erin’s relationship with her real father, who is also conveniently dead, having killed himself after Erin’s mother’s divorces him… I’ll bet you can guess why. The destruction of his mother’s photo, somehow, makes middle-aged Dave worldly and in the finale, he’s seen returning from a months-long hike along the coast, Erin somehow having opened his eyes to the world allowing him to leave San Diego.

I initially thought this play was written by a twenty-year-old. If it was, it would be easier to forgive the exposition and lack of nuance or knowledge of the myriad of emotions an older male character would have in this scenario – a twenty-something can only imagine what that would be like. Playwright Michael Eichler is not in his twenties. And this is not his first play. There is an interesting character study buried in the idea of Small Little Safe World, something that could benefit from time and rewrites and workshopping.

As it stands, it feels like a first draft by a novice, with the first half of the show almost entirely exposition and characters talking about their backstory which ironically, adds nothing to the story. Director Bo Powell and his actors have little to work with in terms of character and dialogue, but this is when acting and direction need to toil overtime to pull the material to a higher level. Unfortunately, that doesn’t happen in this production. What the audience is left with is a story with poorly-handled mature themes and thin characters produced by young artists eager to do a show.

In defense of this production, it IS called Small Little Safe World. The title is meant to be an allusion to Dave being sheltered and still clinging to memories of his dead mother, not wanting to explore the world or himself. But the title is indicative of where the play exists in its current form. The production is small and safe – this has nothing to do with budget, as productions with no budget can be more impactful than million-dollar extravaganzas. The smallness and safety is in the writing and performances, neither of which are ready for a larger, more mature world.