KCET, the nation’s largest independent public television station, announced today the finalists and the broadcast dates for the 19th annual FINE CUT Festival of Films, a collection of exemplary short films from Southern California student filmmakers that is made possible by The Bridges / Larson Foundation.

In total,16 short films (25 minutes or under) were selected as finalists in the categories of Documentary, Animation and Narrative shorts.

Winners in each of the categories will be announced at a private awards ceremony and screening event sponsored by IndieWire on Wed., Sept. 19 at the Director’s Guild of America (7920 Sunset Blvd. Blvd., LA, CA 90046) and awarded the opportunity to be a part of the American Pavilion screening at the Cannes International Film Festival in May of 2019 thanks to a partnership with The American Pavilion, the epicenter of American hospitality and communication at the world’s largest film market.

All short films selected as finalists in the FINE CUT Festival of Films will be included in a series of half-hour broadcast episodes on KCET public television in Southern California that will air starting Wed., Sept. 26 at 9 p.m. with many films available for streaming at kcet.org/finecut. 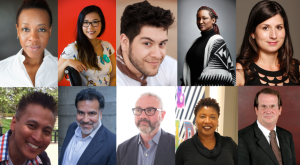 A fourth trip to the 2019 Cannes film festival will be awarded to the recipient of The Jack Larson Student Filmmaker Award which exemplifies FINE CUT founder Jack Larson’s commitment to fostering new generations of filmmakers in Southern California. This award recognizes the filmmaker’s strength as a storyteller. Last year’s recipient of this award, Southern California film student Tom Teller (“Hum”), will review the finalists from this year’s pool to select the 2018 honoree.

In addition to appearing as part of the broadcast series, all finalists of the 19th Annual FINE CUT Festival of Films are also eligible for the Viewers Choice Competition, where filmmakers will have a chance to have their peers and at-home viewers vote online at kcet.org/finecut during and up to one-week after the broadcast date. The winning filmmaker will be notified in November and receive a production package prize worth over $15,000.

The winning Animation, Documentary, Narrative and Jack Larson Student Filmmaker Award films will be selected as part of the American Pavilion Emerging Filmmakers Showcase at the Cannes Film Festival in 2019, hosted by The American Pavilion as well as a networking event.

Each filmmaker will receive a cash prize up to $500 to use towards airfare and accommodations for five nights through The American Pavilion Emerging Filmmaker Travel Accommodations program. Additionally, three of the winning films from The 21st Annual American Pavilion Emerging Filmmaker Showcase competition will be featured in the FINE CUT broadcast series.

The finalists were announced as follows:

Over 300 films were submitted by filmmakers enrolled in 54 Southern California schools (36 collegiate level and 18 grade schools). Additional stats include:

The festival is a tribute to FINE CUT founder Jack Larson who was an American actor, librettist, screenwriter and producer who may be best known for his portrayal of photographer/reporter Jimmy Olsen in the 1952-1958 television series Adventures of Superman. In the late 1990s Larson approached Southern California’s KCET with the idea of creating a student film series that would provide talented students with the much needed opportunity to have their short films selected for television broadcast. Larson understood how difficult it was for young filmmakers to get broad exposure for their work because, typically, student work is only seen at special screenings and film festivals. Larson thought that public television was an excellent platform for providing critical visibility to emerging filmmakers. KCET shared Larson’s enthusiasm and together they created FINE CUT, which continues to be a flagship program for KCET today.

*KCET and Link TV are expected to merge with PBS SoCal, subject to regulatory approvals.

On-air, online and in the community, KCET plays a vital role in the cultural and educational enrichment of Southern and Central California. KCET offers a wide range of award-winning local programming as well as the finest public television programs from around the world. Throughout its 54-year history, KCET has won hundreds of major awards for its local and regional news and public affairs programming, its national drama and documentary productions, its quality educational family and children’s programs, its outreach and community services and its website, kcet.org. KCET is a donor-supported community institution.. KCET is a part of the KCETLink Media Group. Select original programming from KCET is also available for streaming on Apple TV, YouTube, Amazon and Roku platforms. For more information visit http://www.kcet.org/apps.