‘An Evening of Betrayal’ with The 6th Act 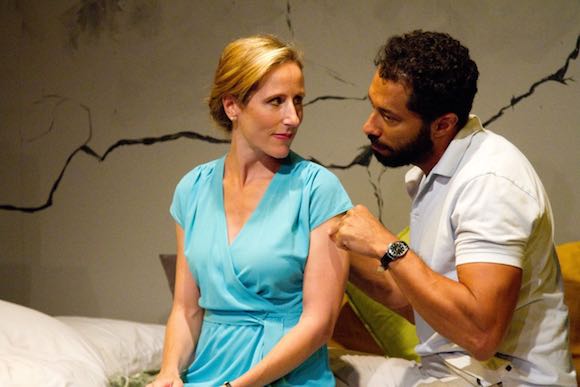 Deception is a lot of work!

Just when you think you are stepping away from a humdrum relationship, suddenly the boredom creeps right back into the routine of what used to be an exciting interlude. Maybe even in a worse way. And the far more amplified betrayal engulfs everyone – your partner in the affair, your spouse, your family, your friends and in the end, yourself.

On the other hand, sometimes, you only perceive a betrayal or are led to believe there is one.  But who is guilty? And who…is truly innocent?

Either way you’re screwed as proved in An Evening of Betrayal, presented by The 6th Act, at Theatre 68, where two masters of language, Harold Pinter and William Shakespeare, are lined up side by side, as they investigate the same subject.

The first half features Harold Pinter’s Betrayal in its entirety. After a short intermission, the same four actors perform an abridged one-hour adaptation of Othello, told backwards to mirror the structure of Pinter’s Betrayal.

It’s an intriguing concept and well organized by acclaimed Director Elizabeth Swain, who pulls no punches with the material.  But as much as the device is, without hyperbole, exceptionally done in Pinter, it gets long in the tooth (and long in the evening) for Shakespeare.

Shakespeare aficionados may find this interesting.  But with Othello, it’s an insider ball-game if you are not familiar with the play.  And it could be said that the 2nd act could not stand alone without the ‘warm up’ of the first.

Never-the-less, the actors in this production are some of the finest you will find in Los Angeles and elsewhere.  A stellar cast of four, William DeMeritt, Luke McClure, Liza Seneca, and Adam J. Smith, fill these stories with power and precision.  And there is a certain titillation of hearing these two plays together, juxtaposed by Pinter’s economy with language and Shakespeare’s passionate poetry.

Seneca really is the center of attention of the evening, shining with diamond brilliance in both plays as Emma in Betrayal/ Desdemona & Bianca in Othello. She is as mutable on stage as she is glowing, thoroughly exalted in her exploration of her characters.  Completely matched at every turn by co-star DeMerritt (Robert in Betrayal/ Othello in Othello) who dominates the stage. And equally by other co-stars Smith (Jerry in Betrayal/ lago in Othello) and Luke McClure (Waiter in Betrayal/ Cassio & Emilia in Othello) who are absolutely ambrosial in every one of their respective character deliveries.

Overall, An Evening of Betrayal is a ‘temptation’ meant to be indulged.