What Choice Do You Have? – ‘Native Son’ at Antaeus Theatre 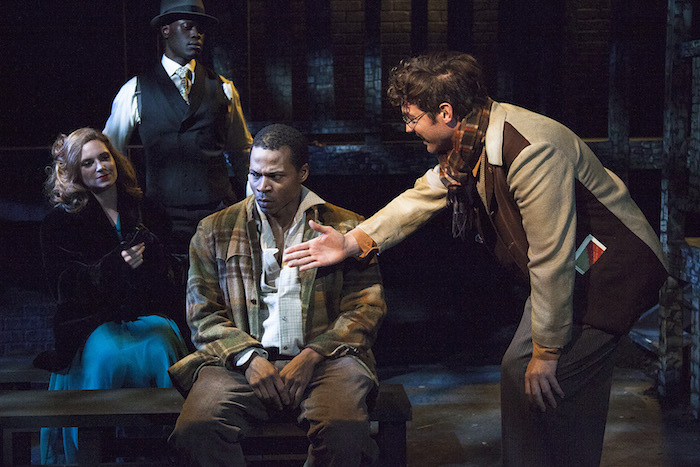 I just couldn’t get past the rape. It was hard to justify.

A statement and a half, yes.  And we’ll get to that…

In 1940, Mississippi born, Jim Crow era, African-American Southerner, Richard Wright wrote the novel Native Son, a story of an African-American youth named Bigger Thomas (Jon Chaffin) living in utter poverty on the south side of Chicago. The book was so graphic and controversial, bringing tremendous light to the harsh social conditions, oppression and institutional racism of African-Americans by this country’s white structure, it became an immediate sensation, and changed the culture forever.

For writer Nambi E. Kelley, the key note on re-adapting this novel for today, (Native Son was originally adapted for stage in 1941 by Wright and Paul Green, and directed by Orson Welles for a 3-year Broadway run at the St. James Theatre), is that for African-Americans, not much has changed.

Bigger is hired as a chauffeur for a wealthy white family, whose daughter Mary (Ellis Greer) is a free-thinker.  When Mary gets drunk one night, Bigger carries her into the house.  But in order not to get caught by Mary’s mother, Mrs. Dalton (Gigi Bermingham) – a black man with a white woman in a bedroom, potentially a criminal offense – he accidentally smothers her. In a panic, Bigger tries to blame Mary’s murder on her Communist boyfriend Jan (Matthew Grondin), but is found out. A city-wide manhunt for Bigger ensues during a blizzard, sending him recklessly out into the night for escape, and wildly into an internal downward spiral.

Intensely psychological, Native Son is entirely defined by a single protagonist, his actions, reactions, emotions, cover-ups – all the terrible decisions that pile atop one another.  Everyone is periphery around Bigger, who’s life is shaped by the most tantamount of early childhood experiences. His father being murdered just for fighting for his rights as a man.

Kelly’s adaptation focuses on the inner workings of Bigger’s mind. Everything is told by his point of view and his Double Consciousness, a manifestation of his other self as The Black Rat (Noel Arthur). While Double Consciousness, as described by W.E.B. Du Bois, is ‘the effect of white racism and always looking at one’s self through the eyes of others, measuring one’s soul through the tape of a world that looks on in amused contempt and pity’, Native Son is looking for empathy.

This production, boldly directed by Andi Chapman, is a stunning departure for Antaeus Theatre.  A rare moment for the company where a modern play is accompanied by a living writer, presented in modern effect, and with a single cast.

In fact, the scenic design by Edward E. Hayes, lighting design by Andrew Schmedake, sound design by Jeff Gardner and video design by Adam R. Macias are so ground-breaking, they synergize the entire lightening-paced action, and Bigger’s thought processes, as the tour de force element of the piece.

There is however, one troubling moment.

On his escape, Bigger takes along Bessie, a woman he ‘keeps’ and who wants to keep him. She wants to see him safe and is also concerned for her own safety, for surely the police will be shortly at her door, accusing her as a potential accessory to murder, just for being Bigger’s girlfriend. In the middle of the night, in an empty building, at the height of the drama, Bigger rapes Bessie.  It is absolutely, horrifically brutal.  And it still has me wondering…

Although nearly every #BlackLivesMatter moment in this play vindicates so much of Bigger’s actions, we also live in a world where the #MeToo movement has brought about a certain cognizance of men who knowingly ‘decide’ to commit violence on women, in this case the rape of Bessie.

Every step of the way, Bigger makes a conscious decision about one action or another, just as much as he is spinning out of control.

So, even as an African-American man, frustrated and angry with white society and the terror of his situation, and given that Bessie is just as societally downtrodden, living under the same yoke of racism, couldn’t he have also decided — not to do it?

3 thoughts on “What Choice Do You Have? – ‘Native Son’ at Antaeus Theatre”