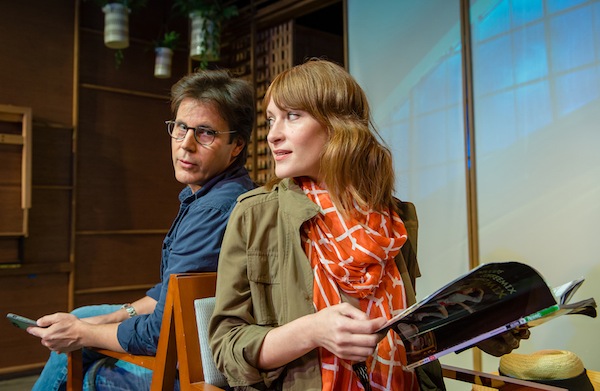 Wendy Graf is best known for dramas that explore themes of family, identity and home within the context of contemporary politics. Unemployed Elephants – A Love Story, a world premiere at the Victory Theatre Centre is a new expedition of sorts, inspired by a trip she took to Myanmar (formerly known as Burma, and a sovereign state in Southeast Asia. Myanmar is bordered by India and Bangladesh) in 2015.

Notwithstanding the actual current politics of Myanmar, which hardly play at all in this piece, admittedly, Graf has taken a big chance in writing her first romantic comedy which, although clever, is not without its flaws.

Like Graf, the characters in this play, Jane (Brea Bree) and Alex (Marshal McCabe) are wandering headlong, somewhat blind into an unplugged world where neither feels grounded. And it’s interesting to see how director Maria Gobetti has made straightforward sense of the material, sometimes where it feels like Graf has not been able to do so herself.

Unemployed Elephants is about two strangers looking for a fresh start while vacationing in Myanmar. Neither is necessarily looking for love, and even when they get together neither of them can be sure it is. The comedy rests in the fact that both are respectively living their own psychological/emotional/physical little-white-lie deceptions with themselves and with each other. It’s mildly laughable. Alex’s buoyant behavior although somewhat erratic is much easier to digest than Jane’s unending tedium. They play a constant cat-and-mouse with the truth.  They even refuse to reveal their respective names to one another at Jane’s insistence. All of which will keep them from becoming attached, becoming truly connected and also from getting hurt. It’s often difficult to understand what he sees in her, or her in him, or why they stay together as they travel the country.  We just want the truth!  And secretly so do they.

Jane has her solid moments though. Once extricated from the embarrassment of being a jilted bride, she is intelligent and thoughtful. But the emotional levels never heat up. There’s just no real chemistry between the actors and it shadows Graf’s agile writing.

They overcome all of it though, with a hopeful ending.

So how do the elephants play into this?

Historically, Myanmar elephants were employed to drag tree trunks up and down the steep hillsides of the jungle as part of its once verdant logging industry, until the government enacted a law prohibiting the export of raw timber. This in effect put approximately 5,500 elephants out of work and in a state of perpetual depression. No one knows what to do with them. They certainly don’t know what to do with themselves. Especially considering the crisis of there being almost no jungle left for them to live.

When contemplating Jane’s and Alex’s respective plights as we come to discover them, their stories parallel the elephants. Neither of them has any real direction. They’re just existing. That is, until they come in contact, awkwardly, with one another.

The evolution of their relationship, although engaging, as cloaked as their respective reasons for being in Myanmar.   It seems they won’t be able to make a deeper connection…until they have a spontaneous encounter with the elephants.  Suddenly there is a clarity to their almost final moment, and it leaves us with a forward-motion high.  Jane and Alex are going to be just fine and probably better than that.

Unemployed Elephants – A Love Story has its many pleasing moments. Graf’s writing is always worth the ticket as is Gobetti’s direction in this production.  Both succeed within a most exquisitely crafted set design by Evan Bartoletti, which is a highlight of this show.

Photo (above) by Tim Sullens: Marshall McCabe and Brea Bee