‘Kaidan Project: Walls Grow Thin’ Is An Adventure For The Hyper-Curious 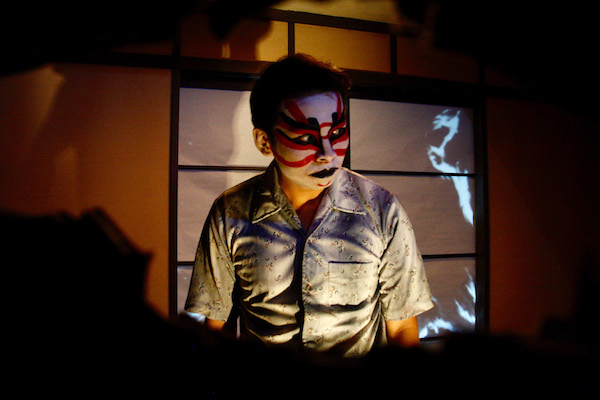 I was sitting with a theater director from Chicago recently who asked me to explain hyper-theater. She had never heard the term and was completely curious if it was even a real name, or a real thing. I answered. Oh yes! Very, very real. And very, very awesome!

In fact, hyper-theater may be my favorite kind of theater lately, and a sort that I’ve been seeking out for the extreme-sport-like thrill. We’ve been seeing more of it lately here in Los Angeles. And I’m personally hoping for an uptick.

On the short list of explanations, it doesn’t necessarily always involve puppets. But it sure is a hell of a lot of fun when it does. Imposing, magical, larger-than-life moving monsters that invade a space as if to say, “mine”.

That is exactly how I would describe Rogue Artists Ensemble‘s temporary pop-up inspired by an amalgamation of Japanese ghost stories, Kaidan Project: Walls Grow Thin, produced in association with East West Players, at a secret location in Los Angeles.

Extreme, fully interactive immersion, and even a moment or two of sight deprivation will make you think you are walking into a haunted-house-like performance. Not exactly.  Or at least, not typically.

Past the initial sales pitch set up to buy storage at the facility, a 10,000 square foot, six-story, Mid-City warehouse space, built in 1927, including a giant elevator employed in the drama (marvelously creepy!), you will be semi-guided and alternately left alone to figure out direction, location and the

whereabouts of the ghost who you’ve been employed to search out. She’s not elusive. But she is scared. And for a very good reason. The Kitsune (Fox) spirit is trying to keep her a prisoner in this other world by making her repeat a mistake over and over again. You will be invited to witness, to follow, to collect, to speak, to listen, to play, and even to run, participating on every level of this weirdly exciting ramble.

Kana Mori (Randi Tahara at this performance) is the lost ghost woman. A fragile, hysterical half-spirit traveling through time and space, leading you, assisted by monks, into room after room that are the fragments of her story and her life.

There is a playful, surreality of the whole production. It’s not so deep that you will forget who and where you are. But once in the thick of the drama, imaginations are peaked and you too may even become lost in the moment. And oh, the puppets!  Rogue Ensemble goes all-out for this production bringing to life this mystical Japanese tradition in intriguing awesome splendor. Keep your eyes peeled!  You will never know what’s coming up behind, in front or sideways of you.

Recommended for the stirring experience, although the ticket price is steep.  2pm performances on Saturday, October 28 and Saturday, November 4 are modified for guests with mobility concerns.

3 thoughts on “‘Kaidan Project: Walls Grow Thin’ Is An Adventure For The Hyper-Curious”