‘The Behavior of Broadus’: Jacob Sidney Takes The Lead

It was a one shot deal for actor Jacob Sidney stepping into the title role of The Behavior of Broadus at the Sacred Fools Theatre on Thursday evening (Oct. 16). And oh how he pulled it off!

Ok, I’ll confess, I seem to have a penchant these days for alternate casts and understudies.  But when every other critic in Los Angeles is jumping into the fray to be the “first man out”, it’s so much more interesting to take a step back and see how things actually progress – well after opening night.

Over the summer at the Hollywood Fringe Festival, I had the opportunity to review Mr. Sidney for his lead role in Hamlet Max, a rather amorphous yet off-handedly effective characterization of Shakespeare’s Hamlet.  So I was quite looking forward to seeing what he could do with an even more obsessive personality.

For his “singular” achievement, Mr. Sidney, who normally plays Dean Stevens, completely dove into the character with exceeding skill.  In comparing photographs of the real John Broadus Watson, it could even be said that Sidney is a bit of a ringer. Truth be told, I never once thought about the fact that he was a “step-in” for the evening. It was the most natural, spot-on, technically well-presented performance that could have been rendered, supported by a wonderfully quick-witted ensemble which, coincidentally also included three other cast members switching places that evening. Due to an injury by actress C.J. Merriman, shortly on her way to foot surgery, cast members took the following roles: Aviva Pressman as Whitey; Kurt Bonnem as Loeb US; Scott Golden as Dean.  Overall, it was a total success. 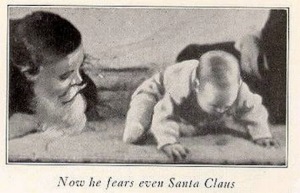 As a musical play, The Behavior of Broadus is mostly hilarious, bright, sit-up-and-pay-attention material that captures the imagination with ridiculous and often profane humor mitigated by dark moments that either suddenly creep in or which are thrust into the forum of the doctor’s lab, his relationships and his own psyche, a place where he himself fears to tread and yet, in his late life, has no choice but to confront. It is a fictionally composed story of the real life of John Broadus Watson, the American psychologist who established the Psychological School of Behaviorism and modern Advertising.

Coming from humble beginnings, John Broadus Watson starts off as a farm boy growing up in rural South Carolina circa early 1900.  Coerced, by his mother, into the religious road of preacher-ism, he eventually makes his way to the savvy sin bearing streets of Chicago to find converts. There he quickly throws down his Bible and finds a path to science. 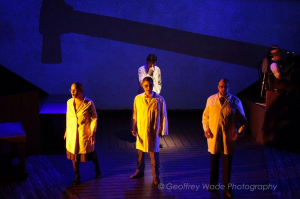 Aided by his will, his imagination and in this version, his very intriguing, anthropomorphic relationships with farm animals and other four-legged testing patients he begins a life-long study on fear and classical conditioning, i.e. how to manipulate the human brain into doing what it is told. In his lifetime, John Broadus Watson conducted research on animal behavior, child rearing and advertising.  His most famous, greatest and undoubtedly shocking experiment was on an 8 month old baby named (Little) Albert with whom he took dangerously extreme liberties in the dissecting and retraining of the baby’s behaviors.  But it was his love affair (as then a married man) with his graduate student assistant, Rosalie Rayner, that ultimately sends him spiraling out of control and summarily booted from John Hopkins University. This consequently also leaves a once emotionally stable baby Albert mentally skewed for life, having been conditioned into phobias he never had. Watson never reconditions the baby back to normal behaviors.

This past season has seen several shows come out of the Sacred Fools Company in collaboration with other theaters and groups, which has upped the level of intensity, sophistication and high-end storytelling.  If nothing else to note, above all, storytelling IS what they do best.  Broadus, written by The Burglars of Hamm and presented in association with The Center Theatre Group, hits the mark. Even with a bit too much length and repetitive music score, especially in the second act, which drains a bit of its impact, it is a first-rate production that with a “dust-up” should enjoy a second life or more in a larger theatre house and with a broader audience.  Let’s hope.

What is stunning in the show is the lighting (by Brandon Baruch) which fully activates and heightens every action and emotion, accompanied by a live onstage orchestra — a distinctly gorgeous yet un-intrusive element in this production. But what I kept coming back to most, was the cleverly thought out movement and dance choreography  (by Ken Roht), impressive in how it often created bold formations, telling its own story, using the entire space and lines of the stage, something, as a dancer, I always look for, but I don’t often see in many theatrical productions.  The costuming matched the timeline.  The animal masks were thoroughly inventive.  And…there was an abundance of absolutely priceless lines, gags and moments from each actor/character in this script.

Broadus is “made-to-order” role for Mr. Sidney and it in he triumphs along with the cast for this piece, especially, the incredibly talented and entertaining Devon Sidell who gives a knockout performance as Rosalie Raynor.

The Behavior of Broadus is undeniably good.

The Behavior of Broadus was commissioned by Center Theatre Group, Los Angeles, CA.  This production was developed with support from Andrew W. Mellon

Photo (above) from the @BurglarsofHamm Twitter feed: Jacob Sidney

One thought on “‘The Behavior of Broadus’: Jacob Sidney Takes The Lead”