Joseph Gross Gallery is pleased to present So Far, So Good, a group mixed media show with work by Hueman, Erik Jones and Alex Yanes. The exhibition marks the first major New York City show for the three artists, each of whom are experiencing a break-out year in 2014.

So Far, So Good will present these rising art stars, each at a tipping point in their respective careers, and draws comparisons between each artist’s distinctive and unconventional style.

Widely known in the LA street art scene and increasingly recognizable from her collaborations with brands like North Face and Nike, Hueman will show 10 new works on canvas and wood panel painted in her signature bold and fluorescent color palette. Semi-autobiographical, each piece represents a period of time in the artist’s life, with vibrant depictions combined in a visual stream of consciousness that breaches the boundary between abstract and figurative art. Expressive and emotive without conforming to any kind of literal narrative, the paintings evoke the exuberance of an artist who has found her individual path by navigating the imperfect state of “being human.” 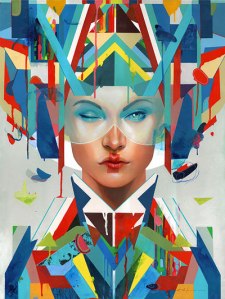 Erik Jones will show 10 new works on paper adhered to wood panel. The artist, who works in watercolor, colored pencil, water-soluble wax pastel and oil with gel based paints, demonstrates his training as an illustrator and experience in fashion photography with clean, precise lines and the strong sense of narrative that runs throughout his work, while also experimenting with more gestural and sporadic brushstrokes. The work celebrates beauty and visual pleasure combined with a predisposition for good design and methodical attention to detail.

Lastly, Alex Yanes will present 19 new works across a variety of mediums and materials that include an installation of individual small paintings depicting the artist’s signature cartoonish characters, an enormous 12 ft. totem pole constructed from oil drums, and new ‘functional’ artworks that play mu 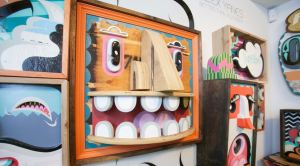 sic recycled from a refurbished 1960’s audio cabinet fitted with state of the art components. The Miami based artist pays homage to his hometown, drawing inspiration from the bright colors and Art Deco designs that surrounds him daily, while also referencing the melting-pot culture of the city and its diverse array of characters. Yanes’s pieces are also notable for their masterful craftsmanship, which the artist learned from his father. The work incorporates a playful sense of energy and optimism that can be positively contagious to new viewers and has the potential to attract even more followers in the future.

About the Artists
Alex Yanes is a Miami, FL based artist. He received his BFA from International Fine Arts College in 2000, and has exhibited in international exhibitions in London and Berlin, and nationally in Los Angeles, Miami, Philadelphia and Chicago. His work has been commissioned by The Quinn Hotel in New York and the Fountainbleu Hotel in Miami.

Allison ‘Hueman’ Torneros is a Los Angeles based artist. She received her BFA from University of California Los Angeles in 2008. She has exhibited nationally and internationally both gallery shows and public murals in cities including Los Angeles, San Francisco, Las Vegas, Miami, London, Berlin, Amsterdam and Geneva. Her work is also featured in brand collaborations including with Converse, North Face and Nike’s Kobe Prelude Experience exhibition at the Staples Center, Los Angeles.

Erik Jones is a Brooklyn based artist. He received his BFA from Ringling College of Art and Design in 2007. His fine art and illustration work has been exhibited nationally and in numerous art fairs, including, Art Basel, Miami; artMRKT, San Francisco; and Scope Art, New York.