The Curse of Oedipus at Antaeus Theatre Company 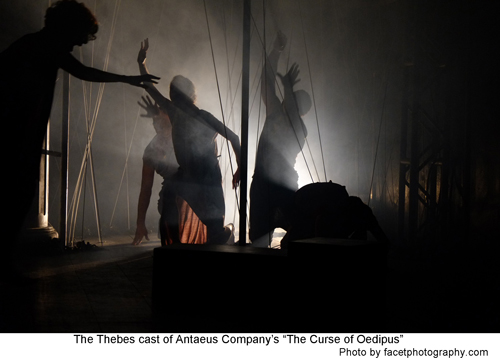 It started off promising but somehow didn’t quite make it all the way.

The world premiere of, The Curse of Oedipus written by Kenneth Cavandar, directed by Casey Stangl and developed by the Antaeus Theatre Company was more like a “little bit of everything soup” than muscular tragedy. 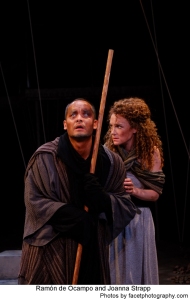 But let’s start with the best of this production, for which there is a more meaningful reason to experience it.  The Curse of Oedipus is a newly translated rendition stringing together the various versions of this legend for what the company calls a “distilled” evening of (a massive) drama: a retold mythology of people caught in a web of pride and self destruction.

There were thoroughly meaty performances delivered poetically intact by Ramon de Ocampo (Oedipus), Josh Clark (Creon, brother to Queen Jocasta), Fran Bennet (Tieresias the blind seer) and Joanna Strapp (Antigone). Each of these actors brought an uncanny believability, evil and righteousness to the characters and moved the chugging story line along at a thankfully measurable pace.  Without the stronger leads the show could have easily stood still.  The story however, is clear and understandable.

So what was off…

Mr. de Ocampo dove deep for the epic, sweeping tragedy  and physicality of Oedipus himself.  But curiously he remained unsupported by a large ensemble cast that although was vocally vibrant, didn’t register intensity that matched him.  The sound effects dispatched by a talented Adam Meyer on drums, were powerful but overall felt more laid-up-against the material rather than intrinsically aligning the movements, emotions, or lyric line.  It never really immersed the audience into the reality. And the opening child sacrifice would have benefited by a little bit more compelling severity rather than what came off as screaming silliness. 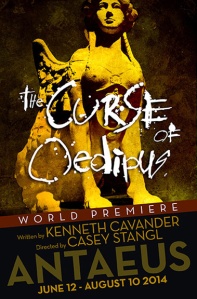 They went for the laughs – sort of.  Playing in the middle somewhere between comedy and drama hurt this production.  At times the characters went for dramatic breath then suddenly dropped into something reminiscent of slapstick.  It’s not to say that it couldn’t work.  But it didn’t. They didn’t “take it all the way” and it made the piece confusing.  The exception was the fun performances of the two brothers, the gods, Apollo (Mark Bramhall) and Dyonysus (John Apicella). Mr. Bramhall and Mr. Apicella’s appearances were like mini mis-en-scenes in themselves; a tete a tete of underplayed neurotic, bitchiness, humor and reason.  Mr. Apicella as Dyonysus especially drove the important ideas of mortality and power home with well–delivered wisdom and a final speech that utterly hit the mark, adding much needed cohesion.

Style is everything. The costumes were decent. There were no fails there. But there was no real excitement or creativity either in their contemporary form. On the other hand, what truly elucidates every moment in this production are the lighting/scenic changes and transitions, beautifully designed by Francois-Pierre Couture.

It’s a long, long way… If it weren’t for the fact that it’s mostly understood that a Greek tragedy is going to take a few hours, the length of this show would have tested the patience of the gods themselves and nothing, not even brilliance should take an eternity.  Even if you are a dedicated classical theater devotee, plan on making a serious time commitment.