Baddass Bitchery and by the way…Yeah, ‘It’s Personal’ 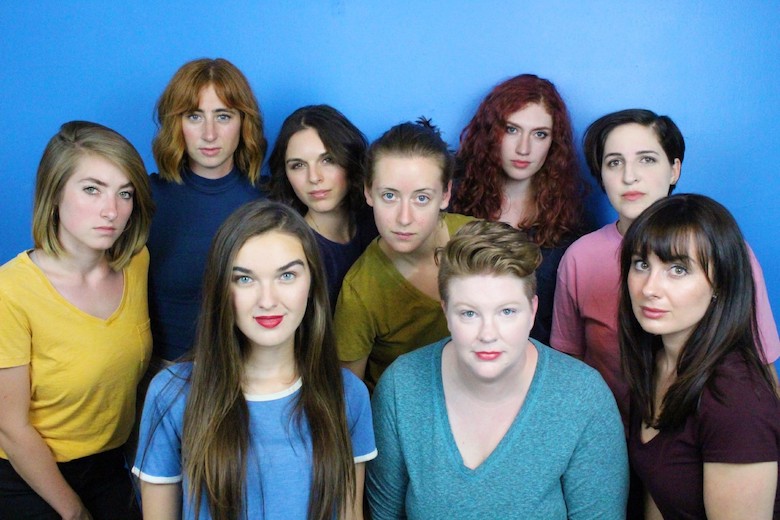 This is the moment when you identify with every story being told, right from your seat, mere inches from the stage.

The flashpoint of real courage in word and deed from nine young, beautiful, quirky, smart, talented, seriously fearless females and you say, “Fuck I wish I had THESE girlfriends! I would be unstoppable. Powerful.”

Where you immerse in the reality that these are not scripts. These are actual lives. Lives lived. Processed. Faced. Alone. Every damn day. Like it or not.

You listen to unadulterated, reveal after reveal of violence, self-deprecation, guilt, hope, survival…dark thunder crashing into the lightening of an electric storm that has been unleashed by the sounds coming from their mouths and the emotions hurling from their physical parts, and feel it full-bodied from head to toe.

You begin to perceive the alone-ness, the shame, the anger, the terror. And then the triumph. Just to be here, right now. To say it out loud because there’s no way to hide this any longer.

You (me) are supposed to be the critic here, but stop being the critic. Instead become the victim, the listener, the storyteller, the avenger. And it’s no small thing to realize that every utterance from their lips to your ears, has also been spoken by YOUR voice. Every action you witness of theirs is one that you’ve also taken consciously or unconsciously in the past. Only now, it is as present as it was ‘then’.

What can you say when you come face to face with another woman’s full-frontal experience? Especially, admittedly or secretly, identical on so many levels to that of your own? It’s the ‘Yes’ moment when you’re not allowed to back off and yet invited to open up to YOUR pain but in this case, in the most positive of ways.

I’ll admit, I thought I was going to be attending a ‘very nice’ evening of 10-minute shorts written by hopeful young actresses who naively had something generally light to say.

Then Boom! From lights up, first girl, the evening was punctuated, by brutally bold, badass honesty. That’s not to say there was no softness. No tears. No silliness. There was plenty of emotion swirling around in the room. And although telling your truth might seem on paper like just another (sigh) anthem for #girlpower feminism in the #MeToo #TimesUp age, it’s not. It’s Personal is just what it is – in two simple words.

It must be hard to hear us, women and girls, I mean, and truly take in much of what we are saying here. What we’ve BEEN saying louder and louder to deafness-inducing proportions. We are interjecting into the landscape, ugliness no one wants to witness or cop to. Even though we know, at least on a superficial level you ‘get’ us.

Yeah, we know…You’ve got mothers, sisters, girlfriends, daughters, friends. You have compassion, even empathy. And mostly you’re trying to figure out how to make it right in your ignominious state of confusion. But at the same time, there’s somehow still a kind of denial about just how deep our survivor stories go. In the back of your mind, you’re also asking yourself, “Am I a perp?”. Because even if you didn’t intend to be you’re planting firm as a man in your justification for possibly having or continuing to be so, albeit not on purpose.

It’s Personal is not a battleground though. No one will be leaving feeling victimized or accused in any way. Just satisfied or at least open-eyed, that there’s been a moment where the truth can be told and you were free to hear it without label, accusation, or revenge.

But realize, it is all indeed, personal, to everyone. 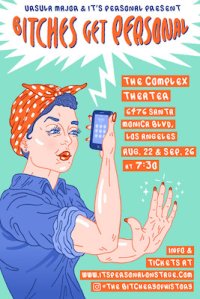 Bitchery of History & It’s Personal return on September 26th, and join forces to create their third annual live podcast and theatrical experience of Bitches Get Personal.

ACT TWO
Bitchery of History live podcast celebrates the women who made history, only to be forgotten by it. Best friends Max and Allison discuss badass ladies (both good and bad alike) changing, creating, and influencing history like two kids at the back of the bus.

forgotten women who made history, life stories about women, live podcast taping, personal stories, plays by women in Los Angeles, stories about daily violence experienced by women, The Complex Hollywood, women speaking up and speaking out