#HFF19 ‘Made For Each Other’, reviewed 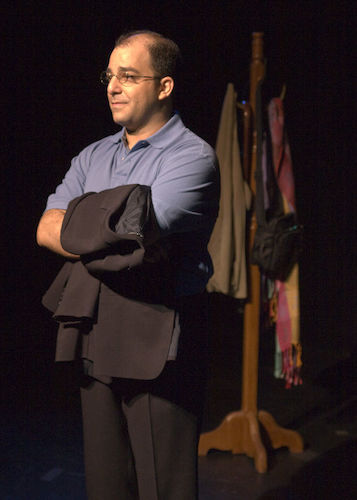 Welcome to Theater Math 101. It’s like new math only more entertaining. Let’s start with an example. One versatile actor (John Fico), plus one insightful playwright (Monica Bauer), plus one inspired director (John FitzGibbon), plus one perfect-size theater (Studio C) equals what? That’s right! The answer is 60 minutes of delightful theater, thanks to the poignant, funny, and thoughtful Made for Each Other. 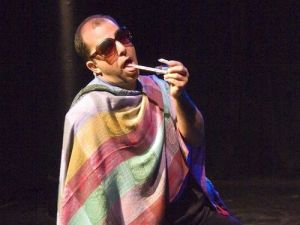 But wait, you say, you heard the play has four characters: Vincent and Jerry, plus Vincent’s mother and Jerry’s Grandfather. That adds up to four actors, right? Wrong. Remember, this is Theater Math. And this four-character play simply adds up to Fico, who plays every role, being a charming chameleon (not literally: chameleon is only a metaphor, which you should have learned about in Theater Grammar 101).

The set for this dramedy is a simple one, basically a couple of chairs and a coat rack, which holds jackets, a scarf, a stethoscope, and a cane, all the props needed for the emotive and expressive Fico to easily transform from one character to another. Seamlessly switching between roles, Fico first introduces us to the bespectacled Vincent, then to his lover, Jerry (minus glasses; add stethoscope), then to Jerry’s grandfather (minus the stethoscope; add a cane), and finally to Vincent’s mother (minus the cane; add a large scarf, plus big colorful glasses).

As in any good play you’ll see during the Hollywood Fringe Festival, each character has his or her own unique personality and mannerism, which Fico captures beautifully, never letting one character’s traits blend into another’s. Each character also has his or her own secrets. Vincent’s secret? He has Alzheimer’s. And he doesn’t know if he can tell Jerry. But he does know that “The truth matters,” And so, he does the math and comes up with an answer. But no cheating in class. If you want to know the answer to this one, I recommend you go see Made for Each Other.