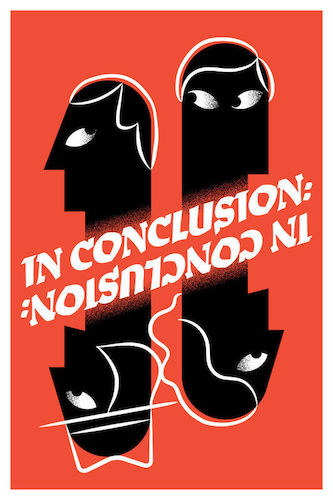 reviewed by Tracey Paleo, Gia On The Move

Although it does not specifically denote anywhere either on the Fringe website or in the show program, In Conclusion, is a loosely adapted re-framing of the infamous 1924 Chicago, IL kidnapping, ransom attempt and murder of 13 years old Robert Franks by Nathan F. Leopold Jr. and Richard Loeb. According to collected records on the New York Times reporting of the case, the murder of the young boy by ‘two young men [both respectively the sons of millionaire businessmen] who were considered some of the brightest youths the city had to offer at the time’, Leopold and Loeb committed the crime for the thrill of the experience, thus garnering the recognition as a Crime of the Century.

The Puckwit Gang removes almost all but one vague reference of Leopold’s reported abnormal state of mind and focuses on Leopold’s and Loeb’s playboy lifestyles, love and despair for and with each other, and nonchalant attitudes about the killing. They tie it all in relatively to suppressed, hideous truths about current icons, homelessness, festering racism and misogyny in our government. In their words… “to wrestle with the horrible to create something good.”

They make their point, mostly, although roughly. There’s a pretty equal balance of what works and doesn’t work about this production which includes interrogation transcripts, medieval poetry, and two pregnant leading ladies (seemingly symbolic), as the moderators of justice. But the ideas are there and the additional choreography is excellent although not seamless in its insertion. Actor performances are completely dedicated.