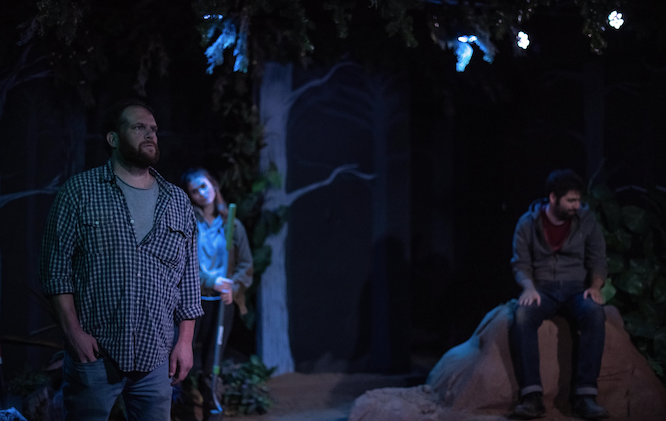 Kerry Kazmierowicztrimm’s new play Gray People, produced by Force of Nature Productions, appearing at The Belfry Stage 11031 Camarillo St. North Hollywood, is an engrossing study of human behavior and a thoroughly enjoyable drama with the twists and turns of a great murder mystery.

Armed with shovels, their wits, and secrets, three people wait in the woods late at night for a nefarious purpose. Partners James and Adam (Walter Kartman and Kyle Felts) are joined by beautiful newcomer Jenny (Olivia Lemmon), which makes Adam suspicious and James flirtatious. As James passes the time getting to know Jenny (against Adam’s protestations), the threesomes past history and connections become more disturbingly clear until…

Extremely well-staged by director Sebastian Munoz on an evocative and immersive set by Jeff Rack, Redetha Deason and Jerry Chappell, Gray People is the perfect play for Fall – the end of a life cycle, a time to bury the past. Walter Kartman, as the nervous puppy-dog-like James, does a wonderful job of digging himself into holes through his constant overreaching, as Kyle Felts’s Adam does his best to protect the both of them by keeping their situation as professional and sterile as possible. Felts does a stand-out job, reminiscent of his equally strong performance in this summer’s Wounded, and Lemmon’s playful yet powerful performance fills the stage with a sense of danger whenever she’s left alone with one of the other characters.

Kazmierowicztrimm has a wonderful knack of peeling off layers of character until we see the rawness that truly drives them. Gray People delves into the lives of people who have been pushed to the grey edges of society, and we start to see how perception can all-too-often be at odds with fact. One can even feel sympathy for characters we logically know we should despise, but human beings are never simply black or white.

With vulnerable performances, crisp direction, set, lights and sound that set the mood upon entry, and a sharp script, Gray People is a creepy fun ride well worth taking.