Nate Rufus Edelman’s ‘Desert Rats’: As Real As It Gets 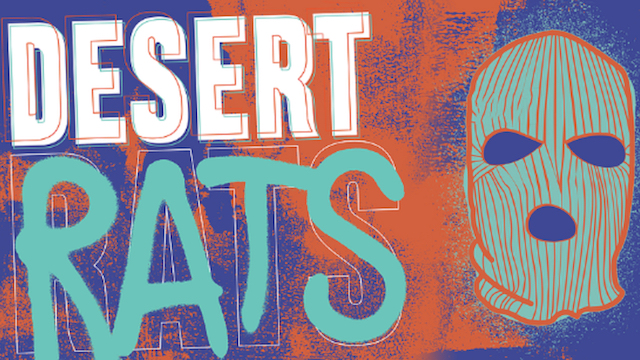 “It’s at that point where you have something great and not mediocre or terrible.”

Playwright and founding member of The Temblors, Nate Rufus Edelman speaks about his upcoming work Desert Rats, which opens this month at The Los Angeles Theatre Center, downtown L.A.

In a surprisingly laser-focused interview, Edelman doesn’t skip, hide or gloss over any of the ugliness of life, nor the importance of talking about his subjects honestly. This was maybe one of the most direct conversations I’ve had with an artist in recent times. So direct in fact, that I couldn’t help but react with instant and absolute emotional/intellectual agreement. He’s the guy who just ‘gets it.’

Desert Rats, which received its world premiere at the Arts Theatre on London’s West End, is Edelman’s dark comedy about life and crime in America’s contemporary West. As Edelman puts it, “The Wild West is not romantic.” It’s a statement driven by witnessing the experience of his grandfather moving at one point to Farmington, New Mexico, formerly known as the hate crime capital of America.

“There was so much conflict between the communities.” (Edelman is part Choctaw Native American on his grandmother’s side. His (Jewish) father was born in a refugee camp during World War II. His mother’s past generations lived through the Irish Potato famine. A history that inspired his own name.) “It’s a town I now avoid.”

In Desert Rats, two brothers kidnap a Calabasas teenager for ransom. But as their plan comes to fruition in a squalid motel room on a hellish day in Barstow, and their hostage is brought out of the trunk, the siblings find their troubles have just begun.

In an earlier statement Edelman says, “I wanted to write a noir-ish crime story that shows two sides of L.A. The brothers are based on people I grew up with. In L.A., even those who seem to have everything can be totally screwed up. In the play, the brothers have each other, but Amber only has money. As in the noir stories I grew up reading, the characters lose everything because they have no control over the world they live in.”

Edelman’s other plays include The Belle of Belfast, which was the recipient of numerous L.A. Weekly and Ovation nominations when it premiered at EST/LA and was a New York Times “critic’s pick” when it was produced by Irish Repertory in New York City; Bright Light City, which premiered at the LATC; Blind Struck; Ugly Luck; and Another Fine Mess.

The intrigue seemed to center most on his influences. So I asked…

You seem to really like very dark subjects and you get directly to the heart of relationships in your plays…at least from what I’ve been reading. Why do you feel so drawn to that?

I think it starts from story. As a kid I was obsessed with novels and short stories and cinema. I grew up in Eagle Rock (California). Right when I graduated high school, the community changed. But there had been endemic gang violence in the area and I found escape in the arts. School bored me. But storytelling seemed very exciting and the darker stories like James King film noirs appealed to me because it reflected where I grew up.

Also, when I was 10 years old, Quentin Tarantino shot Reservoir Dogs, in my neighborhood. It was a major influence. It’s maybe hard for anyone else to understand who doesn’t come from that kind of neighborhood. But for a 10-year-old boy, from a working-class community, it was just cool. I saw it as something I could do.

How did Desert Rats evolve?

I got into NYU as a safe place to write. (He received his MFA in dramatic writing from NYU.) At that time, the east coast theater scene was a complete mystery to me, and I kind of didn’t love New York, being from southern California. It was a different world, with very rich kids, that I wasn’t used to.

During the first week of graduate school a friend from home committed suicide very violently. He was a wannabe Chollo who wanted to be a hit man. He was so [intense], the week before I moved to New York he had put an un-loaded gun to my head a pulled the trigger. It freaked me out. He shot himself in the stomach and it took him twelve hours to die. I was in New York and couldn’t go back to his funeral.

Later, I thought about my time in New York and the weird divide. I had five friends die in violent and shocking ways. I was depressed and felt guilty. Desert Rats came out of these two different sides…what it’s like to be working class losers with wealthy people. I thought, “How can I get them in the room together and talk to one another.”

With this play specifically, it’s about the illusions that people have about each other. Breaking down these characters’ defenses to get to what they have in common. Both sides are so sad.

You are a member of the Chocktaw Nation. You come from a rich history of artists, musician, storytellers, innovators, leaders, athletes, warriors and caregivers…even World War II code breakers. Do you feel that’s had any significant influence on your personal writing?

Identity in American and American theater is so specifically big. This script, specifically the first draft, actually had much more of my Native American influences in it. But it was too big for me to tackle. It didn’t work. So, I moved it to a place closer to home.

My grandfather and grandmother, both Oklahomans, were very humble people. The heritage and the kinds of stories and pictures from Oklahoma, what they endured with the Trail of Tears, is profoundly important for people to remember and I think that scar makes you, made me, have to identify with that tribe. It’s been so white-washed. It’s hard to articulate. The reservation is such an image in my life. It’s a big part of my American work.

One thought on “Nate Rufus Edelman’s ‘Desert Rats’: As Real As It Gets”