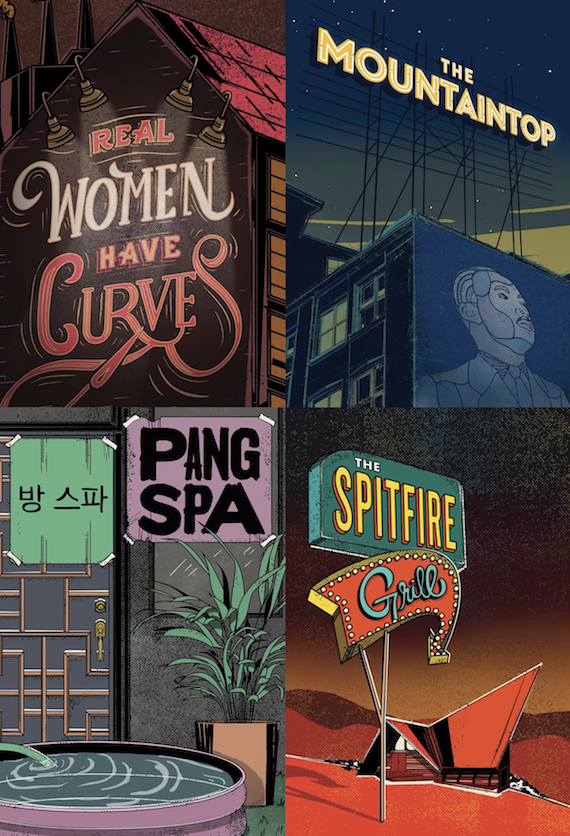 Artistic Directors Joseph Leo Bwarie and Dimitri Toscas have set the 2018/2019 Season at the Garry Marshall Theatre in Burbank, with a 4-Play MainStage line-up that explores the extraordinary things that happen in ordinary places.

Following a successful and art-packed inaugural year, the second season of the new nonprofit continues to grow with an extended marshallARTS Family Series, more Movies at the Marshall fundraising screenings, and thrilling events in December with Holidays at the Marshall.

From the factory to the motel, and from the apartment to the café, the stories in the 2018/2019 Season wind through the ordinary hallways of our lives with poetry, sacrifice, courage, and humor – transforming the simple journey into an extraordinary adventure.

Featuring a diverse group of voices, with two playwrights speaking directly from LA, the season opens this fall with Josefina López’s classic coming of age comedy, Real Women Have Curves about a close-knit community of women in a tiny family-run factory and how fresh-out-of-high school Ana breaks the mold. Real Women Have Curves is created by an all-women team, from the playwright and the director, to the designers and the stage manager.

The late spring brings the Los Angeles-made play Pang Spa by David Johann Kim, from another LA-based writer and a world premiere play from the Garry Marshall Theatre’s 2018 New Works Festival, that strikes a profound chord of hope and redemption as the Pang Family deals with its unresolved past in LA’s Koreatown.

And finally, the summer brings the James Valcq and Fred Alley musical The Spitfire Grill, based on the film by Lee David Zlotoff, with a soul-filling story that redefines the American dream.

April will be all about family at the Garry Marshall with a rootin’ tootin’ wild west musicale The Root Beer Bandits, with book and lyrics by Joseph Leo Bwarie and Lori Marshall and music by Rachael Lawrence. This all-ages musical is an old-fashioned slapstick comedy with colorful dances and high-paced vaudevillian antics.

This year’s Movies at the Marshall fundraising screening series this year will feature screenings of films in which Hollywood legend Garry Marshall showed off his acting chops! The screenings are on select Monday nights, starting in September with Soapdish and October with Hocus Pocus. A family friendly matinee screening of the animated feature Chicken Little is set for November.

During December, the Garry Marshall Theatre will present a line-up of holiday-themed events, beginning with Impro Theatre’s 1966 Holiday Variety Extravaganza, in which Impro Theatre will improvise a complete LIVE “television show” with music in the style of Andy Williams, Perry Como, and Judy Garland, November 30 through December 9. December continues with two concert offerings. A Blu Christmas on December 13 and 14 features international pop and jazz singing sensation Jonny Blu and his 7-piece band. Holidaze Harmony X then makes a splashy 10th anniversary appearance on December 21 and 22, starring recording artists and Broadway veterans Terron Brooks and Kamilah Marshall in a spectacular show-stopping performance with a full band and back-up dancers.

October 12 through November 18, 2018
Previews on October 10 and 11
Real Women Have Curves
By Josefina López

In a tiny, family-run factory, fabric flies and tempers flare when Ana, fresh out of high school, rebels against the status quo with dreams of becoming a writer. But deportation and the pressure to not abandon her heritage become a heated debate. These incredibly strong women gossip about food and sex and love… and size, while rewriting Corporate America’s definition of beauty. It’s a coming of age comedy, set in East LA, written, directed and designed by an all-woman team.
Produced by special arrangement with Dramatic Publishing.

February 8 through March 10, 2019
Previews February 6 and 7
The Mountaintop
By Katori Hall

April 3, 1968. Memphis. The Lorraine Motel. Room 306. Tomorrow, it will become the scene of one of our nation’s greatest losses. But tonight, it is just another stopover motel for Dr. Martin Luther King, Jr. Full of vivid theatricality, poetic language, and surprising twists, this drama takes us to the summit of a man’s historic life and offers a stunning new view of his dream for our nation.
Presented by special arrangement with Dramatists Play Service.

What would you give to be made whole? When a young renter
moves into a tenement apartment building, the Pang family is flooded with memories from an unresolved past. Koreatown is the vivid foundation of this multi-generational drama built on heart and humor. This world premiere is LA-made but strikes a profound chord of hope and redemption that reverberates through the universal American experience.
A world premiere production from the Garry Marshall Theatre’s 2018 New Works Festival.

July 12 through August 11, 2019
Previews July 10 and 11
The Spitfire Grill
Music and Book by James Valcq
Lyrics and Book by Fred Alley
Based on the Film by Lee David Zlotoff

Run away to a small town where they “roll the streets up at night” and find yourself in a café that serves up a soul-stirring story with a strong cup of joe. This joyous musical bubbles over with toe-tapping fun and soaring, heart-felt melodies – and is proof that a new beginning is as close as your own back porch.
Presented by special arrangement with Samuel French, Inc.

Holidays at the Marshall Series

November 30 through December 9, 2018
Impro Theatre’s 1966 Holiday Variety Extravaganza
Travel back to the swingin’ Sixties for a night of holiday hilarity with the
award-winning Impro Theatre and their unscripted, totally improvised LIVE variety show that delights in the comedy and music stylings of “Holiday Special” icons Andy Williams, Perry Como and Judy Garland.

December 13 and 14, 2018
A Blu Christmas
Join international pop and jazz singing sensation Jonny Blu and a line-up of his recording artist pals for a Holiday Soirée Concert Event to ring in the season. This FUNDRAISING event comes with a 7-piece band and the drinks are on the house!

Treat the family to an old-fashioned slapstick musical comedy, plum full of original songs and colorful dances, set against the shimmering wild west, back when folks were pannin’ for gold! Hold on to yer hats, ‘cuz laughs are sure to be aplenty in this high-paced vaudevillian show for all ages.

Movies at the Marshall