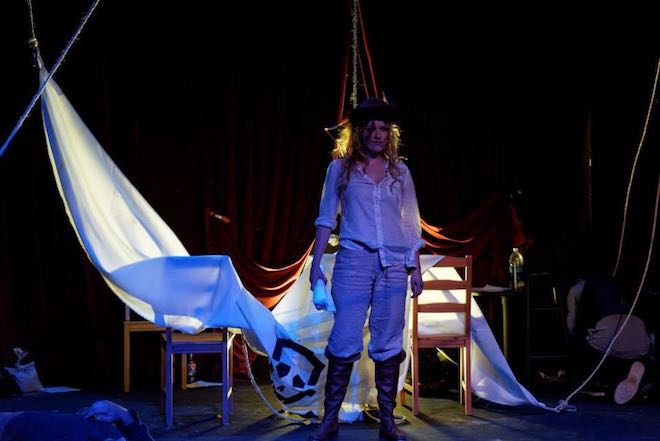 Since its launch in 2015, the renowned She NYC Arts has produced 21 full-length shows from women playwrights, earning praise for its commitment to discovering and cultivating some of the best up-and-coming talent in the theatre world through its open submissions festival.

Featuring four original works (two plays and two musicals), the inaugural festival gives the producers the title of the only bi-coastal festival of full-length plays, musicals and adaptations by women…and one that is expected to keep growing.

“She NYC was started by a group of women working on Broadway and off-Broadway, who felt there was something practical and pragmatic to be done about the lack of women writers and composers represented in mainstream theater.  “While there are a handful of programs in (New York) for women, specifically, to put their shows up in readings, or in shortened versions, or present musical selections in concerts, there was no company producing full-length plays and musical by women via an open submissions process. So with that in mind, a festival was born!”, said Danielle DeMatteo, the founder and executive producer.

The open submissions policy is key to the organization’s success. It allows playwrights the opportunity to not only get their work seen without an agent or manager, but also produced without taking on all the risk and liability.

The festival’s rise in prominence has been rapid. In its first year, She NYC produced two new plays, two new musicals and an all-women Shakespeare adaptation. In just its second year, the festival featured two new musicals, five plays and a gender-bending adaptation of Hamlet starring Broadway star Blair Baker. With its growth, the organization set its sights on expansion.

“In 2017, three of our shows had writers that flew in from California to participate in the festival,” said Nakisa Aschtiani, one of that year’s festival writers. “It was clear that there was a need for something like this in the L.A. arts scene, so we jumped at the opportunity to expand to the Best Coast!”

The 2018 She L.A. Summer Theater Festival includes the following shows:

arabesque no 1
By Cambria Denim, directed by Natalie Griffith Robichaux

In arabesque no 1, two actors play fifteen characters telling the story of Bonnie Anderson and
Chris Sanford, as well as their friends, families and anyone who shapes who they become from
Childhood into adulthood.

The Legend of Bonny Anne
By Chandler Patton, composed by Stephens James Schmidt and directed by Andrew Ceglio

Anne Bonny was a real person—a pyrate—as notoriously brutal as she was beautiful. At sixteen, she became one of the fiercest pyrates ever to sail the seas. This is her legend. Her tale is one of romance, betrayal, violence and loss. The history itself is a drama the playwright could never claim to have written. Like a chantey ringing out over the tides, the play drifts in and out of poetic verse. So come my friends, take up your ales and bear witness to this most gruesome tale of guts and gold, of blood and man…thus is The Legend of Bonny Anne.

The Door to America
By Carol Weiss, directed by Wendy Rosoff

The Door to America is a romantic adventure framed by the immigrant experience. A tailor
(Yossel) and his wife (Sadie) arrive at Ellis Island with visions of freedom and success in this new world. They soon discover, however, that nothing comes easily. Not success. Not marriage. Yossel finds work in a sweatshop, helps create a union to benefit his coworkers, and later battles that same union to achieve his American Dream, complicating his relationship with Sadie, who asks only for a baby. Their struggles––and a surprising romance between Sadie’s cousin and an Irish union organizer––create a musical event, alternately touching, triumphant and joyous.

From the musical writing team Dahan & D’Angelo comes Starry, a story of two brothers, Vincent and Theo Van Gogh. Set to a modernized pop-rock and musical hybrid score, this is an earnest take on the thousands of letters they exchanged between each other and the brothers’ inspiring, heartbreaking and transcendental testimony of the power of expression.

Tickets are currently available for purchase.

While festival organizers are focusing on getting L.A. up and running, they’re also excited by where their organization could grow even further.

“For the moment, I’d love to get our footing in L.A and continue to gain respect and notoriety in our two existing cities,” said producer Natalie Morgolin. “Maybe in a few years, we’ll think about expanding to a third, fourth, fifth city! We’ve already gotten interest from cities throughout the U.S. It’s been a joy to watch the writers grow and gain opportunities from being in our festival, and that is an exciting and important way I watch our community grow and succeed!”

No matter where the festival runs, the mission for the organization will always be the same, one the producers feel is all too important in this industry.

“Writers are often the first to start work and the last to get paid, and along the way, they’re expected to self-finance their own readings and productions until they make it big and have a producer raise millions for them,” says writer and producer Kristy Thomas. “After meeting so many writers who had emptied their savings account doing this, we knew there had to be a better way. So, our mission is to level the playing field for women, both financially and artistically, by giving them a safe space to work on their scripts and music in front of an audience.”