Five Drinks, Each A Nod to Duffy Family’s History in Bars

The Owl menu is a reference to the rural Montana bar Patrick Duffy’s parents, Terry and Babe, owned and operated when he was a child. Each of the five drinks on the menu is named for a particularly colorful regular at The Owl.

“The Owl always felt like just another room in our apartment, regulars with grand names like Ed Haley, George Paradise, and Jimmy Stubblefield—who was known to bring his mule right up to the bar with him—were like members of our extended family” says Patrick Duffy. 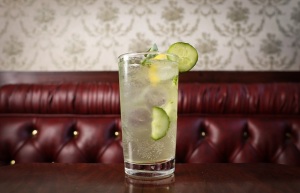 George Paradise
George was the Sheriff in Boulder, Montana. Patrick and George’s son used to shoot arrows at each other to see how close they could get. George’s drink was a highball.
1 oz. Blinking Owl Orange Vodka
1 oz. Mulholland Gin
1 oz. Lilet Blanc
Lemon Twist

Kittie & George
Kittie was Patrick’s best friend’s mother and George looked like a Vegas bouncer but acted like a teddy bear. Together they were a combo that was hard to beat.
Shot JR Bourbon and a can of Hamm’s beer.

The Broadwater Plunge is the only bar in Los Angeles situated inside a live theater that is open to the general public whether or not a production is playing onstage. Guests will never need theater tickets to get into the bar, even when there is.

One thought on “The Broadwater Plunge Unveils First Cocktail Menu”