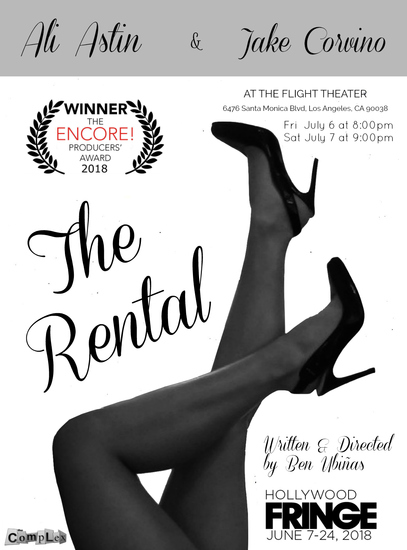 The rather casual opening gives no indication to The Rental‘s streamy storytelling and sophisticated tête-à-tête.

Keith (Jake Corvino), a 20-something college virgin, is gifted the birthday present of app-scheduled call girl, Elise (aka Honey), as a solution to his dating failures.  Throughout the barely successful sexual encounter, Keith continues to want something more intimate.  And Honey obliges, even going so far as to reveal her actual name.  At the moment of connection however, Keith suddenly discovers that they have more in common than he would like.  Attending the same university for starters, and possible other shared relationships that are way too close for comfort.  And it sends him into an insulting panic.  All his initial shy politeness instantaneously gets exchanged for serious jerk behavior.

Honey fights back, challenging all of Keith’s sophomoric ideas about women, sex, status, even comparing their earning ability and, as she points out, the lie he tells himself – that his lack of self-confidence is why he can’t have sex with a woman.  He’s just an asshole.

It’s a tear-down that leaves him with pretty much nothing to do but pick up his belongings and walk out the door.

Admittedly, where (director/writer) Benjamin Ubiñas writing is concerned, the piece is as smart as it is hot.  But there are moments when one wonders how Honey, unshakable as she is, outright gets away with such a ballsy confrontation in what could also easily come across as a female revenge fantasy. (It doesn’t though.) Keith’s cowardice is generally enough to rein in most of his fanciful behaviors. But what really prevents him from carrying out a physical slap-down?

In any case, both Astin and Corvino are well matched in casting and intensity, and convincingly play the scenario as highly probable.  They are both so likable, it makes The Rental digestibly believable and even a bit titillating.