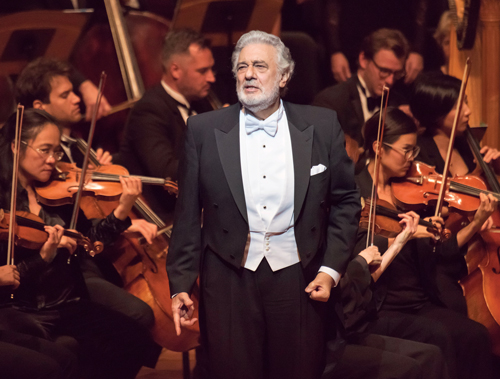 For its third season since opening in 2016, Musco Center for the Arts at Chapman University is thinking big, with iconic stars of opera, dance, theatre, and classical music whose performances and master classes complement and enhance what Chapman teaches, plus dazzling programs suited to a world-class concert hall including acoustic jazz, unplugged American roots, large-scale special events, and culturally specific performances and festivals.

“Once again, the line-up is led by our friend and advisor Plácido Domingo” said Musco Center Dean and Artistic Director William Hall. The international opera star will return with the full LA Opera Orchestra and Chorus in a concert version of Verdi’s Don Carlo, conducted by James Conlon. This will mark Domingo’s fourth appearance at Musco Center since he performed at its grand opening concert in 2016.

“There is no doubt that Maestro Domingo’s long relationship with Paul and Marybelle Musco, and subsequently to the Musco Center, has accelerated by more than a few years our emerging reputation as one the nation’s leading performing arts centers on a university campus,” said Musco Center Executive Director, Richard T. Bryant. Together with Dean Hall, Bryant is responsible for curating and executing Musco Center programming.

For the 2017-18 Season, Musco Center also debuts a new line-up of speakers — The Provost’s Arts and Lecture Series — that features world thought leaders sharing lively discussions and profound ideas in their diverse fields of endeavor.

Subscriptions are now on sale, and individual tickets to all shows will be available beginning on June 20; visit muscocenter.org to purchase tickets or for more information.

The new Provost’s Arts and Lecture Series was added, says Bryant, to answer the need of the university for top-ranked speakers spanning a wide variety of fields. “Chapman University has always been proud that, back in the 1960s and 70s, it hosted such renowned speakers as Martin Luther King Jr., Pearl S. Buck, Margaret Mead, Edward Albee and Eleanor Roosevelt,” said Bryant. “But in more recent years, speaker fees have skyrocketed almost out of sight. Musco Center is pleased to partner with Chapman Provost Glenn Pfeiffer’s office to share the cost of this outstanding speaker series, which will bring some of today’s hottest topics and major thought leaders to the community and our campus.” Speakers this season include journalist Sharyl Attkisson, physicist and futurist Michio Kaku, and social psychologist Jonathan Haidt.

Musco Center’s Heartbeat of Mexico Festival, presented in association with Chapman University’s Latinx Staff and Faculty Forum, returns for its fourth year during the 2019 Memorial Day weekend on Saturday, May 25 and Sunday, May 26. Last year, more than 6,500 attendees celebratedboth traditional and modern expressions of Mexican culture. This year’s ticketed headliners will be announced later in the season while more than 20 of the finest local Mexican and Mexican-American performers and ensembles will fill three outdoor stages on the Bette and Wylie Aitken Arts Plaza in front of the Musco Center on Sunday, May 26.

At the heart of the Musco Center, in addition to Musco Center Presents events, are large-scale student productions and concerts, produced by Chapman University’s College of Performing Arts (CoPA). In addition to its nearly 25 yearly events at Musco Center, CoPA produces more than 100 shows and concerts as part of the pre-professional curriculum in dance, music, and theatre. All CoPA events at Musco Center and other theaters around Chapman University’s campus go on sale August 1, 2018.

You know him; you love him as the virtuosic, engaging leader of Stay Human, the house band that rocks The Late Show with Stephen Colbert. Now Jon Batiste makes his Musco Center debut: singing and playing keyboards and his signature harmonaboard in an anything-goes performance that fully invites the audience to participate in the fun.

Colleen Ballinger created the character Miranda Sings as a parody of the girls she studied acting and voice with: egotistical, antagonistic, and pretty much always off-key. The lovably ridiculous character became a YouTube sensation, a scripted Netflix series, and this hilarious live show that brings Miranda to life. Haters, back off!

Be our guest and experience Disney’s classic animated film in a whole new way: with a live orchestra featuring professional musicians and Chapman students. This tale as old as time dazzles with the Grammy- and Academy Award-winning score by Alan Menken with lyrics by Howard Ashman and Sir Tim Rice.

Opera legend Plácido Domingo, the LA Opera Chorus and Orchestra, and a superstar cast join forces at Musco Center for this concert version of one of Verdi’s grandest creations! Don Carlo is an enthralling tale of morality and mortality, starring renowned tenor Ramón Vargas in the title role and Domingo as his heroic friend Rodrigo.

Sharyl Attkisson, Emmy-winning journalist and host of the TV program Full Measure, unravels the hidden world of political opposition research in her latest book, The Smear. In it – and in this eye-opening lecture – she reveals the dirty tricks those in power on all sides use to influence public opinion.

This powerhouse musician and actress is best known for her collaborations with Jethro Tull, Josh Groban, the Trans-Siberian Orchestra, and Chris Botti, as well as her role in TV’s Treme. Her Emmanuel duet with Botti has received more than 7 million YouTube views, and her 2018 PBS special won her millions more fans.

In this stunning display of mastery and athleticism, Chinese warriors descend on a re-imagined ancient Ming Dynasty court for the Emperor’s annual martial arts tournament. Shaolin and Wudang athletes compete with hands and feet flying, while jugglers, contortionists, and acrobats fly across the stage in a show sure to amaze and inspire.

Comprised of seasoned musicians who played in jazz legend Stan Kenton’s band, as well as in the bands of Maynard Ferguson, Woody Herman, Count Basie, and others, the Stan Kenton Legacy Orchestra keeps the big-band flame burning brightly. Enjoy a blazing set that’s “sharp and smokin’ from the outset.” (All About Jazz).

Thursday, Oct 18, 2018 | 7:30pm
Office of the Provost and Musco Center Present
Jonathan Haidt
The Coddling of the American Mind

In this talk based on his new book, social psychologist Haidt explains the rapid changes occurring on many college campuses since 2015. He shows that ideas have consequences – “three really bad ideas in particular” – that are making it harder for young people today to succeed. He situates all this in context of the rising political polarization and cross-partisan hatred that are damaging American democracy more broadly. Dr. Haidt, author of The Happiness Hypothesis and The Righteous Mind, is a professor at NYU’s Stern School of Business.

Globe-trotting superstar baritone Nathan Gunn, one of People’s Sexiest Men Alive, has performed in major operas at nearly every top venue in the world. On this outing he appears with his wife, acclaimed pianist Julie Gunn, to offer an intimate performance that transcends the form of opera, ranging from Mozart to Bernstein and Kurt Weill.

Since its formation in 2000, the Quartetto di Cremona has become one of the most exciting chamber ensembles on the international stage. The quartet is an ambassador for the international Friends of Stradivari project and plays the Stradivarius Paganini Quartet, instruments on loan from the Nippon Music Foundation, including the same violin played by Henri Temianka.

This performance at Salmon Recital Hall made possible by Zeinab Dabbah and Daniel Temianka.

Saturday, Nov 10, 2018 | 7:30pm
Chapman CoPA Theatre and Musco Center Present
If All the Sky Were Paper
By Andrew Carroll
Directed by John Benitz

Over the past two decades, historian Andrew Carroll has devoted himself to collecting and preserving U.S. wartime correspondence, amassing a collection of more than 100,000 letters now housed at Chapman University. Carroll’s play, featuring readings of real letters by a cast including Chapman alumni and professional actors, is a moving, powerful work that stirs and inspires.

The athlete-illusionist dancers of Pilobolus know how to pack lots of magic into a stage performance. Since their founding in 1971, these versatile tricksters have incorporated puppetry, gymnastics, acrobatics, theatrics, and extreme “wow” effects into their bravura offerings. It’s hard to predict what they may do next but whatever it is, it will be extraordinary.

Already a renowned star by age eight, Sarah Chang continues her quest for perfection and is recognized today as one of the foremost violinists of our time. With an international performance schedule now spanning more than two decades, her talent takes her around the world and has seen her appear in every major concert hall.

Michael Feinstein has built a dazzling career over the last three decades bringing the music of the Great American Songbook to the world on television, radio, and in dazzling live concerts. His holiday show will include beloved pop standards along with a selection of seasonal favorites.

Join us for the second annual tradition as more than 150 performers from across Southern California – musicians, singers, and dancers – bring you a holiday spectacular packed full of your favorite carols. There’s something for all ages in this merry delight, a show that is sure to make your Christmas season glow brightly.

Now in its 41st season, this crowd- pleasing, high-flying ensemble opens up a world of human movement, forever changing your understanding of what is possible for the body and soul. The company is critically acclaimed for its exuberant and innovative repertoire, featuring works by master American and international choreographers.

Two Hall of Fame bluesmen on one stage – and that’s just the start of what’s in store when Elvin Bishop and Charlie Musselwhite join forces. Between them, there are more than 100 years of the blues, and this promises to be a front-porch session that shimmers with history and that rarest musical quality: authenticity.

Rosanne Cash carries on the famous Cash family legacy in the best way possible: with her own unique voice and a timeless mixture of country, folk, blues, Americana, and jazz. In a duo with husband/songwriting partner John Leventhal, Cash summons the spirit of the American South in all its history, heartache, and humanity.

Since its founding in 1946, the mighty Juilliard String Quartet has conquered the planet with performances charged with passionate energy and adroit elegance. “The most important American quartet in history” (Boston Globe) performs “like a single four-voiced instrument…the music it makes sounds like the most natural and inevitable thing in the world” (Broad Street Review).

A master of building his music from the ground up, from live violin loops to multi-layered singing and beatboxing, Kishi Bashi designs remarkable pocket symphonies steeped in classical music and pop. Backed up by a string quartet, the multi-instrumentalist offers his dreamlike, dizzying, danceable repertoire: as hard to define as it is easy to love.

In theoretical physicist/futurist Michio Kaku’s new book, The Future of Humanity, he posits that a human settlement on Mars is a “definite possibility.” With irrepressible enthusiasm and wonder, Dr. Kaku takes his audience on a fascinating journey to a future in which humanity may finally fulfill its long-awaited destiny among the stars.

A champion of the classical guitar, Cuban- born Manuel Barrueco combines perfect technique with a sense of rhythms from tango and flamenco, garnered from his travels through virtually every country in Latin America. With more than a dozen recordings for EMI and collaborations with luminaries including Plácido Domingo, he is arguably the world’s finest living guitarist.

Combining the big-band swing of the 1930s and 40s with contemporary music such as funk and jazz fusion, the Big Phat Band, led by pianist/saxophonist/arranger Gordon Goodwin, is a national phenomenon. Goodwin’s charts bubble over with melodic ingenuity and infectious rhythms.

Direct from Scotland’s renowned Edinburgh Tattoo, this ensemble consists of more than 55 bagpipers, drummers, singers, dancers, and other musicians. The performance includes beloved classics old and new, from Scotland the Brave to Amazing Grace. Nearly all the participants regularly perform in the Tattoo or compete in Glasgow’s World Pipe Band Championships.

Friday, Mar 22, 2019 | 7:30pm
Dustbowl Revival & Hot Club of Cowtown
Across the Great Divide: A Celebration of the 50th Anniversary of The Band