HFF18 ‘Meanwhile Back at the Super Lair’, reviewed 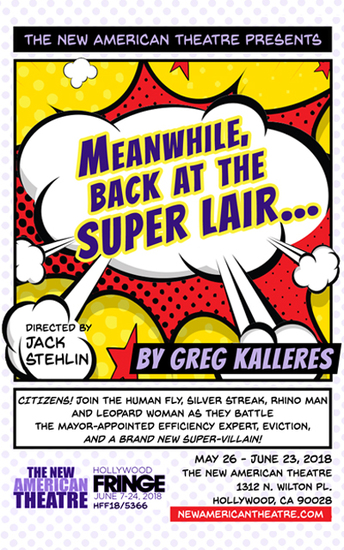 Easily, one of the best scripted comedies at the 2018 Hollywood Fringe.

Playwright Greg Kalleres’ ridiculous camp romp about love, death, sex, and white privilege, Meanwhile, Back at the Super Lair, is currently subjecting audiences to a ‘men (and woman) in tights’ extravaganza with no shtick spared in the fight against a lack of evil.

A bunch of completely powerless and ludicrous crimefighters struggle with the meaning of life as they protect a city with no crime. The Human Fly, Silver Streak, Rhino Man and Leopard Woman share a city-funded sublet and are suddenly under investigation by a mayor-appointed efficiency expert for possible eviction.

It’s a race against time, especially now that Streak’s sister is moving back from Europe to reclaim the apartment. And considering that none of them are qualified for a minimum wage job, the stress is on. Especially for Fly who, in order to address his own existential crisis, (as his therapist doesn’t seem to be helping), and the fact that girlfriend, Leopard, is suddenly sleeping with his best friend, devises a plan to resuscitate all of them from the brink of uselessness.

Truly hilariously, and so well directed and performed, Meanwhile, Back at the Super Lair, marvelously exploits every nook and cranny of super hero fandom.