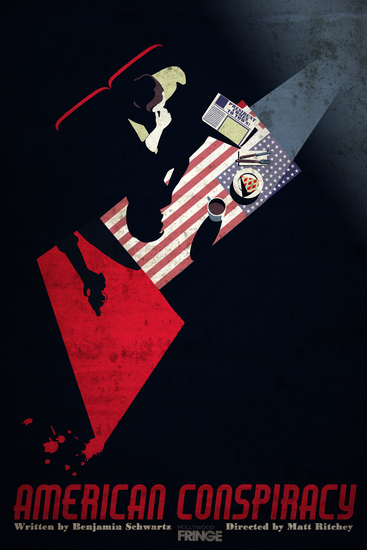 John Hinkley Jr. (Hank Doghan) is loosely depicted in American Conspiracy as the consensual wild-card, used by his own brother, Alan (Spencer Cantrell), in order to save the family’s oil business via an attempt to assassinate the President of the United States.

Downplaying the celebrity fascination and upscaling him to depressed, on meds, and just plain gun-toting crazy status,  on the day of the attempt, John meets Jane (Katelyn Schiller), a waitress who is at present claustrophobically burdened by her guilt-throwing, repressive mother, Fran (Amy Smallman-Winstonz), and the owner of a local Texas diner quickly falling into ruin. Jane wants nothing more than to leave to finish college. Her mother wants her to inherit the disaster.

Although the momentary connection is happenstance, Jane and John’s lives, as depicted here, are actually intertwined long before John walks into the diner.   The Presidential Parade route is nothing more than the perfect hold-up location. And yet, the more sinister player is the insurance company that holds the policies of both Fran’s and Alan’s business, and has the power to keep their livelihoods afloat…with a sinister caveat.

According to playwright Benjamin Schwartz, this is a story about family.  How we abuse each other, positively and negatively.  And that part of the script is crystal clear, as is the writing in the development of the relationships. What isn’t always, is Schwartz’s choice to showcase family relationships through this particular story.  Although, it does make for some interesting melo-drama.

Either way,  Schiller and Smallman-Winston, really fill the stage best, and fill out the life of the work most brilliantly, which, at times, undercuts John’s story, mostly illuminated through the dialogs between David Garver (insurer Trent) and Cantrell.

Incredibly well-done overall by all the players.  Direction by Matt Ritchey really holds this piece together.