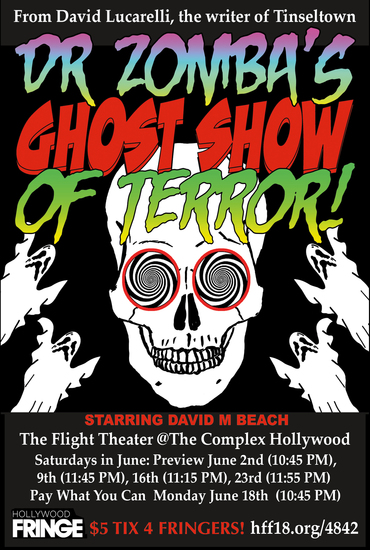 “Please turn off your cell phones (and pagers..yes…really) during the presentation. The ghosts will get pissed!”

Billed as ‘The strangest show on Earth’, you’ll love it, you’ll hate it, you’ll want to carve its heart out with a spoon.  Doctor Zomba’s Ghost Show Of Terror  is beyond the silliest ghost and magic, late night feature you’ve ever seen, baffling to logic as to why it continues to sell out.

The one thing you will have at this modern day revival of the Ghost Show popular in the 1950’s, is fun…as incomprehensible, unfathomable and abstruse fun (yes we’re getting creative with our fancy adjectives here!) as may be possible.

Featuring spooky magic, comedy, a séance and a blackout immersive ending, Dr. Zomba and his captive assistant zombie Sirena, will mesmerize you with their completely mystifying ability to actually tell a joke and thoroughly entertain a crowd.