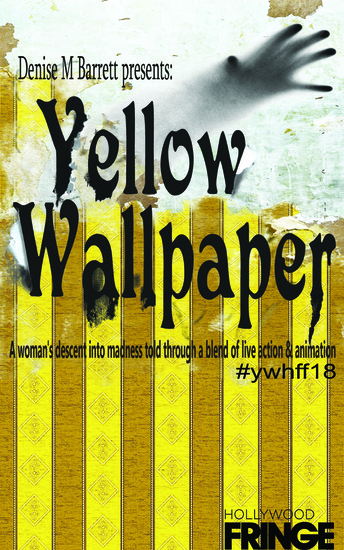 Yellow Wallpaper is a short story written by Charlotte Perkins Gilman in the late 1800s about Jane, a woman suffering from mental illness, and the toll it takes on her and her family. It was intended to shine a light on then- (and still-) current problems regarding the diagnosis and treatment of the disease. This fantastic story is given an update, both in time period and in technology, by Denise M. Barrett in her Fringe production at Studio/Stage.

The time is now the 1950’s and Barrett uses truly impressive video effects (by Steven and Kevin Hilton) to create the yellow wallpaper and the images and sounds emanate within and from it, calling to Jane. The ability to see Jane’s (Tatum Langdon) psychosis is impressive and arresting. The script feels very much like the original short story, which undercuts the update to the 1950s a bit, with language and manners that feel extremely turn-of-the-century being used in a far more modern style of dress and action. The stoicism of the family also feels less about the culture of the time period it was written and more disaffected.

With great visuals, Yellow Wallpaper seems to ask, “If we can see and hear Jane’s descent into madness, are not we, too, mad, in a way? And what shall we finally do about it?”