Danna Schaeffer: For My Daughter, For Me

“Wounds heal, because unhealed wounds lead to death.  But, we are seldom reminded that a synonym for ‘healed wound’ is ‘scar,’ and scars are with us every day.  Our inclination is to cover them, because they are not pretty.  But real bravery lies in letting them show, because they are the reason you’re allowed to go on.  They represent imperfect repair of that which is irreparable.  They are an honor to see.”

Imagine being a mother whose 21-year-old daughter is fatally shot in the chest, by a mentally ill man with a gun, just as she opens her apartment door.

Then imagine being that very same mother, in the aftermath of that shooting, facing the rage of an entire auditorium of angry, gun-control opponents, raining down boos and hisses before she even opens her mouth to speak. Just the mere suggestion, “Could we please not have assault weapons in the county?”, somehow ignites more outrage than the actual murder of Danna Schaeffer’s daughter.

“I didn’t even know they were boo-ing me. Afterwards people came up to me and apologized. And it actually backfired on them (the opponents). People came out and said, “Where do I sign? (a petition)”.

That was back in 1991 when the (1989) murder of up and coming actress Rebecca Schaeffer (My Sister Sam, Scenes From the Class Struggle in Beverly Hills), seemed like a fluke and the Brady Bill, federal legislation which would require a seven day waiting period to purchase a hand gun, was on the table, hotly debated and opposed even then by the NRA (the NRA pushed for the Staggers ‘Point-of-Sale’ Identification System which was defeated 234 to 193), that members of the Senate didn’t actually pass until 1994. Rebecca’s killing also galvanized a national movement against stalkers which resulted in anti-stalking laws in every state.

It’s a drama, that in 2018, seems familiar and all too ordinary.

Gia On The Move spoke with Danna Schaeffer, Rebecca’s mom, for a glimpse into her upcoming Hollywood Fringe production, You In MidAir, which for some may augur a bit of circling the political wagons surrounding the national discussion of gun control.  For Danna, however, it’s more…and less…than that.

Actress Rebecca Schaeffer’s blooming Hollywood career was cut tragically short by murder when an obsessed fan shot her on her doorstep in 1989. You In MidAir (official site) is Danna’s  story of loss, memory, and hard-won wisdom.

I’m naturally kind of dingy and I think it helps with grief.

Why this story now?

Because I could. It’s been so many years and so much time has gone by, and I’ve dealt with much of the grieving process. 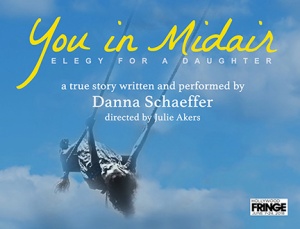 I wrote a memoir three years ago. The first 29 chapters were about my life as a child, because I thought I didn’t have the guts to write about Rebecca. I actually only wrote one chapter about my daughter.

Fast forward to my manuscript being read and I get told that I needed to throw all 29 chapters away. That the story of Rebecca was what needed to be told, and that it needed to be a theatrical presentation. I agreed.

So, I took some acting classes in Portland, worked with actors and got assistance with the writing.  You know, for two years I studied the Meisner technique and it was the weirdest thing to follow in my daughter’s footsteps.

Synergistic in the weirdest way…

Yes.  My director has helped me a lot including mounting this piece at Portland’s Fertile Ground Festival of New Work, which was very low tech. After that I decided I wanted to do a full production. And I wanted to do it in Hollywood. I’ve been working on a lot of re-writes and will probably be writing up until the Hollywood Fringe debut. I’m re-writing as I speak! The piece continues to change and I have found joy in that.

Rebecca’s story is very poignant considering the tragedy at Parkland High School Florida shooting and the number of gun violence deaths in 2018 alone. Are you hoping for some after effects by telling this at Hollywood Fringe?

Those young group of kids are so brave. Back then, the NRA ended up getting what they wanted. I hope the impetus of what these kids have started continues to grow.

I just want to tell my story.

I tried to tell the stories of all the other people at first. But I couldn’t tell 30 stories. I can only tell mine. I want to get on stage and open up a vein; let people be viscerally affected. Because this is only one story in the multiplication of thousands of stories about people who are killed every year.

My family.  My husband who has been there with me every step of the way; my three brothers; my youngest brother who is creating the graphics and his wife who is producing the Hollywood Fringe show for me; my nieces…

This entire journey has been a crest of family love.