Poetry Deathmatch Cabaret at The Bootleg 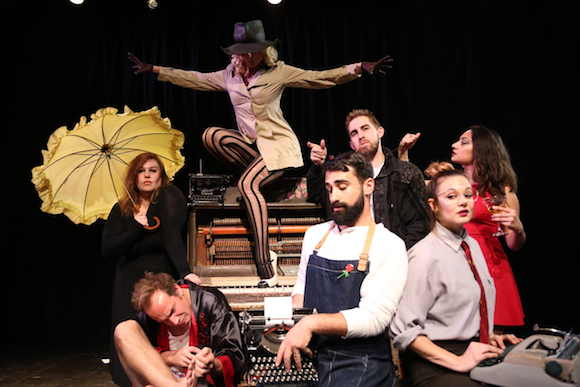 Melrose Poetry Bureau describe themselves as a live-writing ensemble with an emphasis on blurring the lines between poetry, theatre, and improvisation. They have built a loyal following at the Bootleg Theater through Write Club, and Quick Draw Poetry Cabaret. This show sees them further developing and refining their artistic identity.

The wide Bootleg stage is shrunk a little by the artful arrangement of six tables of varying heights with red velvet cloths and typewriters. A piano and various pieces of period furniture and props add to the salon feel. Depression-era jazz plays before the show.

The performers enter as a group and do an ensemble poem, lighting themselves by flashlights. All the poets have distinct personalities and are costumed accordingly, like the Spice Girls but with English degrees. Brian Sonya-Wallace then steps forward as the main host of the evening and tells us what’s in store. There are competitive rounds where poets try to best each other using suggestions from the audience as prompts for their poems, which they bash out quickly on the typewriters, as another poet fills the time with a prepared piece. The competitors then perform what they have just written and the audience voice their verdict. This is poetry as gladiatorial combat, with some comedy on the side.

For me, the prepared and rehearsed pieces worked rather better than the freshly-produced fare, particularly strong were Aman K. Batra’s poem about visting India and seeing its creeping Westernization, and Linda Ravenswood’s manifesto for feminist theatre. James Gangl’s made-to-order song to a European techno track was an honorable exception.

The audience participation element seems a bit forced but the packed house played their part with gusto. When you ask a hundred people to shout suggestions, it’s best not to have loud music playing at the same time.

Erin Bridges does a couple of charming burlesque(esque) routines between poems, including a typewriter striptease. The design and stylistic elements seem to hark back to a time when words could be dangerous for the people who wrote or said them. But the words on offer here were largely contemporary and harmless, every mention of Snapchat or Instagram getting a Pavlovian laugh from the Gen X crowd.

Overall, it is an ambitious show, aiming to popularize a previously niche art-form, and to that end it is clearly succeeding. One can’t help feeling though, that the raucous and self-congratulatory atmosphere created by the performers is not the ideal home for some of the more genuinely beautiful poems on offer.