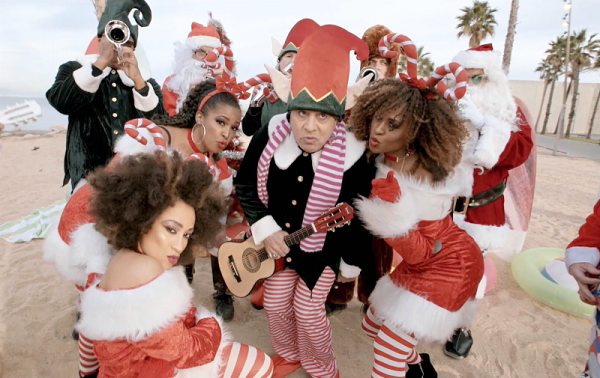 Christmas has come early with Little Steven and the Disciples of Soul‘s jubilant new video for their just-released holiday song, Merry Christmas (I Don’t Want To Fight Tonight). In the festive clip, frontman Steven Van Zandt, decked out in head-to-toe stripes, elf ears and a pointy hat, leads his 15-piece band, all dressed in their merry best, through a spirited update on the Ramones classic.

The band, looking like they’re having an absolute blast, performs the song with toy instruments on a sun-soaked beach and in their hometown New York City while footage from vintage movies and cartoons from the early 20th century like A Trip To The Moon, Santa Claus Conquers the Martians and A Christmas Carol is interspersed throughout, adding to the videos exuberant nature. The video is premiering at Billboard.

The song is available at all digital music retailers and streaming services.

Merry Christmas (I Don’t Want To Fight Tonight) sees Little Steven and the Disciples of Soul bringing their one-of-a-kind sound to The Ramones’ Yuletide classic, written by Joey Ramone and first found on the B-side to the 1987 single, I Wanna Live. The new rendition – arranged and produced by Van Zandt – was recorded last month during soundcheck in Utrecht, Netherlands in the midst of their extraordinary Soulfire Tour 2017, capturing all the spirit and energy of the 15-piece rock ‘n’ soul revue at the very peak of their formidable onstage power. Rolling Stone debuted the track upon release last week and enthused that it, “sounds much grander in Van Zandt’s hands,” adding, he “created a Wall of Sound with glockenspiel, chimes, string, organ and sleigh bells, a vocal chorus and saxophone.”

“This is our tribute to the Ramones, keeping their music alive,” Van Zandt told Rolling Stone. “I needed a third verse so I channeled Joey and wrote what I feel is the third verse he would have written. His brother Mickey heard the record and gave me his blessing.”

Little Steven and the Disciples of Soul – who recently rocked NPR’s World Music Café with an exclusive interview and three-song live set – are wrapping up their action-packed year with two holiday homecoming concerts. Last night, they played a rousing show at Brooklyn Bowl in Brooklyn and this Saturday, December 23 they will perform at the Count Basie Theatre in Red Bank, NJ. For ticket availability and exclusive VIP packages, visit littlesteven.com.

Van Zandt is the featured guest on the latest installment of WTF, the widely popular podcast hosted by stand-up comedian Marc Maron. In the hour and a half freewheeling conversation the legendary musician, songwriter, actor and founding member of the E Street Band talks about his latest album, Soulfire, his musical upbringing, acting, activism, the history of rock and roll and musicians who have influenced his partnership with his career-long collaborator, Bruce Springsteen.

Episode 873 of WTF featuring Steven Van Zandt is available to stream and download.