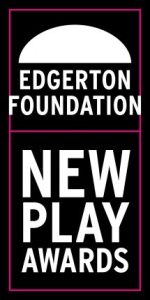 Theatre Communications Group (TCG), the national organization for theatre, is pleased to announce the recipients of the second round of the 2017 Edgerton Foundation New Play Awards. The awards, totaling $1,051,000, allow 27 productions extra time for the development and rehearsal of new plays with the entire creative team, hoping to extend the life of the world premiere play after its first run.

Over the last eleven years, the Edgerton Foundation has awarded $11,295,900 to 375 productions, enabling many plays to schedule subsequent productions following their world premieres. Twenty-seven have made it to Broadway, including: Curtains, 13, Next to Normal, 33 Variations, In the Next Room (or The Vibrator Play), Time Stands Still, Bengal Tiger at the Baghdad Zoo, A Free Man of Color, Good People, Chinglish, Vanya and Sonia and Masha and Spike, Bronx Bombers, Casa Valentina, Outside Mullingar, All the Way, Eclipsed, Bright Star, Hamilton, The Columnist, In Transit, A Doll’s House Part 2, Indecent, Dear Evan Hansen, Oslo, Escape to Margaritaville and The Prom. Fifteen plays were nominated for Tony Awards, with All the Way, Vanya and Sonia and Masha and Spike, Hamilton, Dear Evan Hansen, and Oslo winning the best play or musical awards. Nine plays were nominated for the Pulitzer Prize for Drama, with wins for Hamilton (2016), The Flick (2014), Water by the Spoonful (2012), and Next to Normal (2010).

“If you weren’t sure about whether we were in a golden age for playwriting, this round of Edgerton Foundation recipients should confirm it,” said Teresa Eyring, executive director of TCG. “By supporting the initial rehearsal process for these plays, the Edgerton Foundation propels these works to future productions and inclusion in our ever-expanding theatrical canon.”

The second round of the 2017 Edgerton Foundation New Play Awards were presented to:

Describe the Night
by Rajiv Joseph
at Alley Theatre

“Snow Child is a major challenge and one that will take all of our talent and shared imaginations. Along with the unique music combination of Alaskan back-country and contemporary musical theater, we will use puppetry for the animals which will underscore the rough magic of Alaska,” said Molly Smith, artistic director, Arena Stage. “Capturing the environment of this piece, from the Alaskan forests to the snow to the visceral nature of the child makes this production a fantastic undertaking. We are deeply grateful to the Edgerton Foundation for providing us with the funds for an additional week of rehearsals, as it will enable us to take on this challenge and attempt to capture the power of Alaska.”

Support Group for Men
by Ellen Fairey
at Goodman Theatre

One House Over
by Catherine Trieschmann
at Milwaukee Repertory Theater

Saint George and the Dragon
by Rory Mullarkey
at National Theatre

Issei, He Say (Or The Myth of the First)
by Chloé Hung
at New Jersey Repertory Company

“It is rare for Native American playwrights to be produced in American theatre, and premiering Manahatta at a theatre the size of the Oregon Shakespeare Festival (OSF) is a high stakes opportunity for Ms. Nagle, OSF and the field,” said Bill Rauch, artistic director, OSF. “Telling a Native story comes with the responsibility for the piece to be presented in a way that is true to the Native experience. The extended rehearsal made possible by the Edgerton Foundation New Play Award advances and deepens the work significantly in preparation for its world premiere. With the full creative team together for the first time, Ms. Nagle, Ms. Woolery and the cast can perfect the complex doubling and tripling of characters that will enhance their challenging and essential on-stage transformations, delve together into the intricate Lenape language, cultural references and history, and refine the brilliant interspersing of Lenape language and song throughout the play.”

Sex and Other Disturbances
by Marisa Smith
at Portland Stage

Ibsen in Chicago
by David Grimm
at Seattle Repertory Theatre

Doing It
by Boo Killebrew
at Victory Gardens Theater

The Beast in the Jungle
music by John Kander, book by David Thompson, direction and choreography by Susan Stroman
at Vineyard Theatre

The Edgerton Foundation New Plays Program, directed by Brad and Louise Edgerton, was piloted in 2006 with the Center Theatre Group in Los Angeles by offering two musicals in development an extended rehearsal period for the entire creative team, including the playwrights. The Edgertons launched the program nationally in 2007 and have supported 375 plays to date at over 50 different Art Theatres across the country.