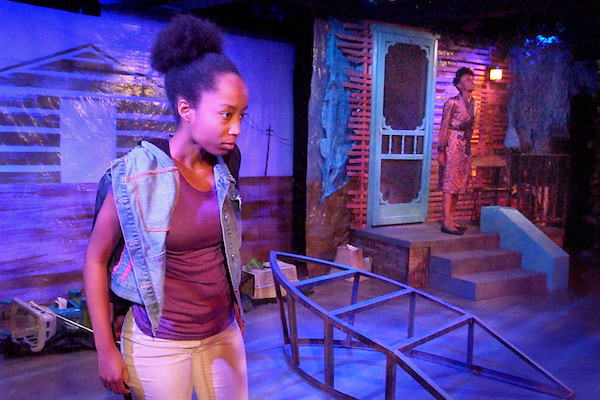 According to Fountain Theatre co-artistic director, Stephen Sachs, Runaway Home, a world premiere by Jeremy J. Kamps, directed by Shirley Jo Finney, puts a human face on citizens rebuilding after Katrina. And although…“the storm of Katrina ceased in 2005, the storm of racism, poverty and class inequality rages on in our country to this day.”

Considering recent hurricane disasters Harvey and Irma, the play is prescient and right on point. It is strongly presentational and focused on the chief character Kali (Camille Spirlin), a 14-year old, rambunctious runaway, growing up without a father, misunderstood by a mother, Eunice (Maya Lynne Robinson) who doesn’t quite know how to love her, and recently pregnant by a boy she met while relocated to another place after the hurricane swallows up her home.

As the story progresses, we discover that her grandmother has died during the disaster. When the waters rose to the roof of their house, they are rescued just in the nick of time. But grandma dies in the middle of the drama and because room has to be made for the living in the rescue boat, her body is unceremoniously pushed off-board. It’s a terrible internal catalyst for both Kali and Eunice which sets all the behaviors of both women and all the repercussive events hence, one way or another.

Like many works whether plays, movement compilations or literal essays, the overarching material is simply too huge in scope, too boundless to encompass in a single drama. And so tidbits and vignettes of the lives of a very few people are chosen to express the massive grief, loss, anger, and much resentment. But also determination.  Ultimately, the ones who trudge through the sludge, in this case, the actual left-overs of flooding in New Orleans’ Lower 9th, are forced to face a bare reality and either self-destruct or create something new of their own making but with zero illusions and no going back to the past. There is none. It’s all been washed away.

In a small perspective, it’s a mother-daughter story fraught with internal confusion, rebellion and the desire to escape one’s circumstance. On a larger scale…coming to terms with where you are right now and stepping into transformation by letting go.

Kali comically rhymes and steals and scams her way through the still-destroyed neighborhood, trying to make sense of her life; constantly setting the stage for one tragedy after another.  There are devastating casualties along the way.  Personal relationships get hammered.  Good people have bad things happen to them.  And hurt people get hurt even more.

Kali herself perpetrates one of the worst catastrophes with bodega(shop) owner Armando (Armando Rey) an illegal, trying to make a decent living in order to bring his young girls from Mexico to New Orleans, who accidentally reacts in fear, and shoots Kali, thinking she is a break-in.  It is a Waterloo moment for everyone.  But tragedy has a keen way of opening only half-open eyes. And the payoff is huge for Kali and especially Eunice who is looking to the memory of her own mother while searching for her daughter, to solve the future.

The conversations of racism, poverty and class inequality play out in a multitude of subtle, day to day ways – its real brilliance; and through off-handed confrontations, jibes and straightforward, almost by-the-numbers scenarios. The politics feel a little peripheral. Occasionally predictable. And there aren’t many surprises. But again, it’s a big story honed in on a few people. The entire cast really runs with this piece boldly, as much as they can. They’re fantastic!

Overall, Runaway Home is a poignant, empathetic and insightful dialog about people offering a window of reality.