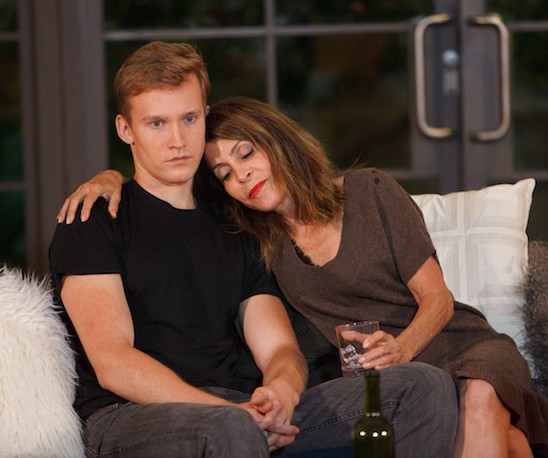 A classic dysfunctional family. A descent in to nothingness. A single question. “Why are we here?”

Pterodactyls, written by Nicky Silver (The Lyons), directed by Melanie Weisner, currently being produced by Pop Up Theater Inc. at The Commissary at Culver Studios, isn’t as haha as you might expect from a tangled, soap-like dramedy about 5 people skimming the surface of reality.

Pterodactyls, as written, suggests that our extinction is beginning not with an asteroid or an ice age but rather with a severed connection to the ones closest to us.

The play opens with two awkward lovers, Emma and Tommy attempting to have sex on the couch in Emma’s very expensive estate. When Grace, her mother, arrives home from a shopping spree in the city, gasping for a drink, she is completely undaunted by the scene. In fact, she ignores it entirely except to disrupt the two for assistance and demanding to know Tommy’s prospects once Emma announces they are in love and going to get married. Tommy is a waiter at a salad bar and living in a sort of shanty town, which of course, won’t do. And so, Grace decides to temporarily install him as replacement maid, pantyhose and all, for the staff who has apparently disappeared, to help him earn an income.

What ensues from there is an uneven screwball comedy that includes a neglectful father somewhat lustful for his own daughter who, as we quickly discover, has lost her long-term memory, an estranged brother newly arrived home with HIV, and a polygon of attempted relationships where everyone wants intimacy with a person who wants nothing to do with him or her.

It is simplistic at times (believe it or not). In the first act, almost stilted in the delivery. But what initially comes across as superficial and out of sorts is also a genuine reflection of the characters as they live. Everything about them is out-of-order. Cerebrally each cling to what they think is connection. But every attempt is as eery as skating on a numbingly cold day, atop a frozen lake of ice, ready to break beneath, completely unaware.

All of their respective wants are either disturbing, depressing, annoying, violent or downright icky at times. Ultimately, they’re destructive.

So why is it important to watch these people foist their endless and pointless melodramatic minutiae upon one another. And why do we even need to witness any of it?

The answer to that may be as simple as the one discovered by the characters: To watch a family run its course.

Within our own relationships with friends, lovers and families, we don’t necessarily see or want to see the slow detachments, the denials, and the desperation that creates boxes, borders and walls over time.

So, voyeuristically witnessing the emotionally stunted phenomena of others’ dramas playing out before our eyes is perhaps the only way we can recognize it for ourselves. Perhaps that is one of the points the playwright is making in this piece.

In any case, like the pterodactyls of the Dinosaur Age, there is no particularly distinguishing moment that can identify the family’s demise. Only time and for them, emotional distance.

This play takes a huge stretch in connecting the whole idea of extinction through the love of film. But ok, we went with it all night and didn’t really find it apart from one character and only slightly.

And it’s not until the 2nd act when their worlds begin to get smaller and there are fewer obstacles or excuses to get in the way, that they are suddenly forced to at least begin addressing reality. It doesn’t entirely happen. For some not at all. And extinction is the only pass go.

Overall, Pterodactyls is entertaining and thought-provoking, if not meteorically impactful in its moment to moment presentation.