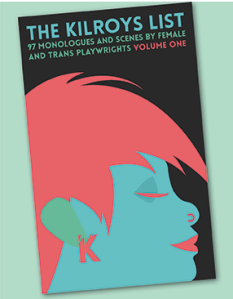 Hot on the heels of the LA-based collective, The Kilroys, releasing a vetted list of plays by female and trans writers of color, Theatre Communications Group (TCG) announced today the publication of The Kilroys List: 97 Monologues and Scenes by Female and Trans Playwrights, Volume One.

The Kilroys are a gang of playwrights and producers who came together in Los Angeles in 2013 to stop talking about gender parity in theatre and start taking action. In 2014, they released their first annual List: a vetted collection of plays written by female and trans writers, nominated by hundreds of professional artistic directors, literary managers, professors, producers, directors, and dramaturgs. This collection includes a monologue or scene from each play from the 2014 and 2015 editions of The List.

“And at last there are the Kilroys. A group of kick-ass theatre artists who declare there is no excuse, in the twenty-first century, for producers and artistic directors to insist they cannot find women or women of color in the field. The incredible Kilroys List makes visible proof that there are infinite playworlds of which our current pipelines can only dream. The Kilroys have amassed writers aplenty to fill hundreds of pipelines.” —Paula Vogel, from her Foreword

The List 2017 features the most recommended un- and under-produced plays written by female and trans writers of color, following a survey of hundreds of professional artistic directors, literary managers, professors, producers, directors, and dramaturgs.

“These plays have been developed and vetted for artistic excellence; they just happen to possess the added bonus of representing a voice that’s currently being underproduced. It’s part of a larger movement to say: ‘There’s an embarrassment of riches here.’” —Sheila Callaghan