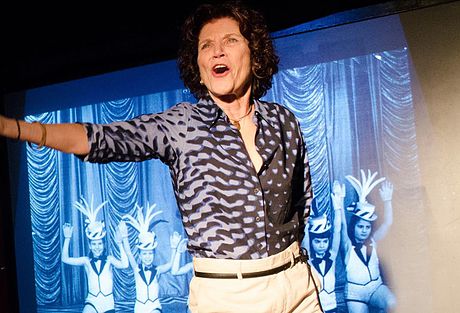 Lynne Jassem has definitely pulled out the stops this year with a re-do of her 2016 Hollywood Fringe production Billy…From Como to Homo and it’s all in the timing. Hurray!

Noticeably shortened in length from its original iteration, Billy…From Como to Homo , directed by Jessica Lynn Johnson,  is finally digestible and smartly leaves behind the complicated details that weighted it down. Starting from her shining moment as a featured tapping wonder on the Perry Como show we move straight into the psychology of Jassem and her strong awareness from just a grade school girl, that she’s got a no-holds-barred, powerhouse boy inside, who just wants to shine in the spotlight. And does, of course, at the most inopportune times until Jassem figures out that Billy knows best for the both of them, and she lets him take the reigns.

Saved are the best highlights of her relationship with her mother, the important milestones in therapy and love.  And bonus!!! – we get to see Jassem’s super sensational hoofing live – something she didn’t do in the last production, but for which it is so worth staying til then end.

One thought on “Gia #HFF17 Billy…From Como to Homo Review”