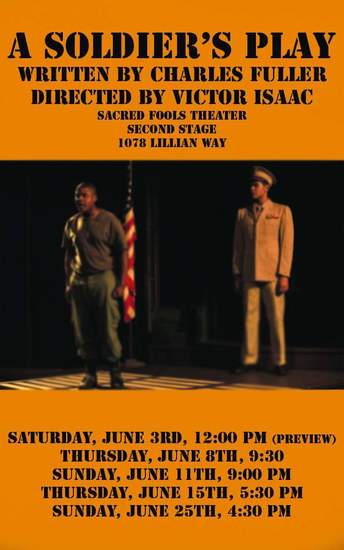 Charles Fuller’s Pulitzer Prize-winning drama, A Soldiers Play has been brought to life at the 2017 Hollywood Fringe Festival by producers Victor Isaac, Jefferson Reid and John Tosetti along with a largely African-American cast, and it’s quite good.

Loosely based on Herman Melville’s unfinished 1891 novella, Billy Budd, the play originally was staged Off-Broadway by the Negro Ensemble Company at the Theatre Four in 1981 and boasted Denzel Washington and Samuel L. Jackson amongst its cast members.

A Soldier’s Play explores the complicated feelings of anger and resentment that some African Americans have toward one another, and the ways in which many have absorbed white racist attitudes. The rendition presented here aims to illustrate the current racial divide in America.

The story takes place at Fort Neal, Louisiana, during a time when the military was internally segregated and surrounded in a hostile town where the Klu Klux Klan, was known to execute many a black man, even ones enlisted in the United States Army, without any recourse. It’s hostile. When the sergeant of an all black company is murdered, a white Captain successfully keeps an all-out retaliatory war happening from within the ranks, and then Captain Richard Davenport, a black officer shows up to investigate. Game on.

Less tension-filled than it is revelatory in witnessing how the different characters play out their feelings with one another. A Soldier’s Play certainly houses within it the dialog of racism between blacks and whites. But it decidedly hones in on the dynamic that overarching racism creates among like people. How hate itself can splinter groups from within, causing its own unique, intramural, more insidious prejudices.

There are some genuinely exceptional cast performances happening here and the production succeeds in what it sets out to do. Directionally, there are a few hiccups and the play gets long. Stage fighting isn’t the most believable. Otherwise, it really hits its marks in the best way.

One thought on “Gia #HFF17 A Soldier’s Play Review”