The Price at Roundabout Theatre Company 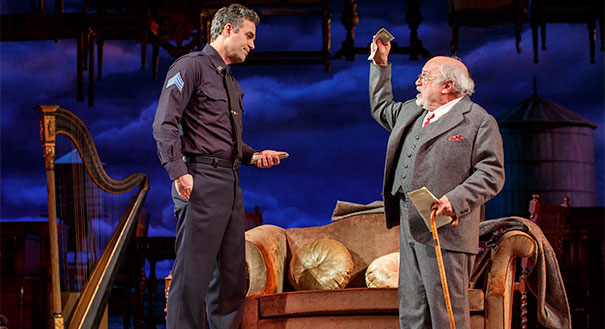 Our great playwright, Arthur Miller, plunges into the relationship between two brothers meeting after sixteen years. Unspoken family secrets are exposed, and old wounds are revealed. In a brownstone attic, four characters meet and clarify the price each has paid for making life-defining choices. Besides the brothers, the wife of one is present, and a furniture dealer.

One could view the four characters as totems of timeless character types, archetypes of a sort: the naive, true believer, the amoral self-interested, the crass materialist, and the survivor-at-all-costs.

One brother, a cop near retirement after 23 years, the other a successful doctor, meet in a dusty, unoccupied house to sell the depression era furniture of parents long ago deceased. They haggle over price with the old Russian.

The dealer is played wonderfully by Danny DeVito; wily and wise, he knows every negotiating ruse in the books–he feints, shifts, and dissembles. DeVito, a natural comedian, plays Gregory Solomon, and goes for the laughs, nicely mixed with his character’s fiesty, survivor’s instinct; the furniture is either out of style, cracked, too large, not “Biedermeier,” and on and on–he won’t give an inch.

Mark Ruffalo plays the troubled cop, Victor Franz, who arrives with his wife Esther. Victor is stuck in a world with no knowable escape being broke with no future. Brilliant as a youngster and full of hope, he pays the price for his good-hearted, youthful decision to care for his father and not attend university, not knowing his father had duped him into believing he had lost his entire fortune.

Victor has no answers. His wife Esther (Jessica Hecht) badgers Victor constantly about money, about status, change, and threatens to leave him. She is a modern-day Lady Macbeth with psychological daggers. Will change come? Unlikely, as he reveals, some people just don’t bounce back well.

Victor’s brother, Walter arrives late, played by Tony Shalhoub. The tone is somber, not rushed, as the brothers slowly exchange stories. Clearly both orbit in difffernt worlds, with Walter being an unhappy but successful scientist. The language captures the 50’s–open, direct, manly–as bitter truths are revealed about withheld information, money, and intentions. Walter represents the brother who has extricated himself from the family, and carves his own path; he cares for no one but his own success without guilt. He represents the cold-hearted, amoral materialist while his brother, the meek, mild, and good.

Perhaps the producers thought this play was timely for the present state of the State; but like the unfortunate The Cherry Orchard put up earlier this year, it is so much more than mere sociology. The Price is a simple story, focused, even ordinary you may say, but eternal: It’s about the irrevocable decisions we make, cause and effect, the validity of free will in our choices, and the thorny idea of individual perspectives.

The cast, Mark Ruffalo, Tony Shalhoub, Jessica Hecht and Danny De Vito, direction, set design were all top-notch–seasoned professionals who gave the audience the best feeling one could have at the theatre–the redemptive collaboration between actor and audience that transcends mere words. Thank you Arthur Miller. Thank you Roundabout for a terrific revival.