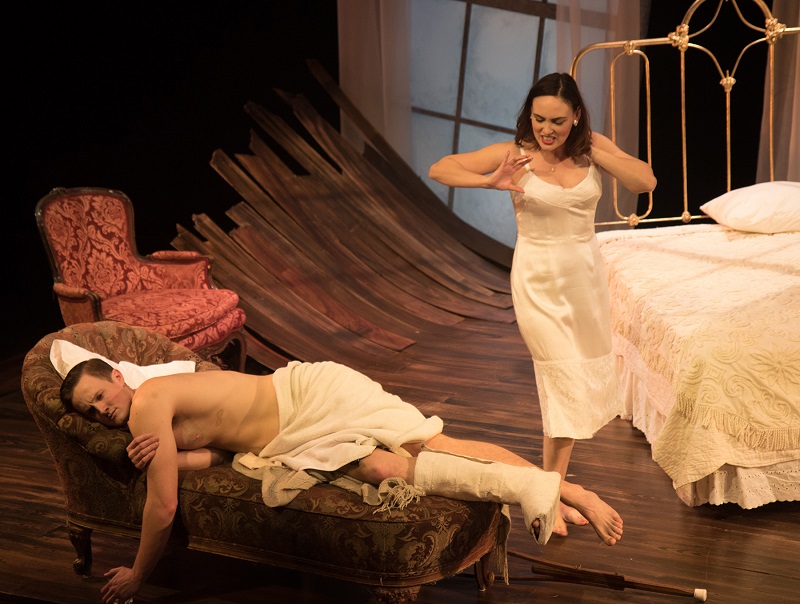 Only one expression is needed to describe the opening night performance of the Antaeus Theatre Company’s Cat on a Hot Tin Roof: “On Fire!”

Set in the 1950s, the language of the play has not been white-washed. And the taboos of the time, homosexuality (almost completely removed in the 1958 film version to the disappointment of  Paul Newman who played Brick) and alcoholism are confronted head-on.

An explosive performance in three full acts, from lights up to lights down, there was not a thin moment on stage from any single actor of the Buttered Biscuits cast, Ross Philips, Rebecca Mozo, Harry Groener, Dawn Didawick, Jocelyn Towne, Patrick Wenk-Wolff, Mitchell Edmonds, Tim Halligan, Vivienne Belle Sievers, Helen Rose Warshofsky, who, with the inspired direction of Cameron Watson, took on Tennessee Williams’ Pulitzer Prize-winning masterpiece with a volcanic fierceness that was utterly raw. The result: a literal breathe-taking finale, that permeated the space with pregnant awe.

Cotton tycoon Big Daddy is dying of cancer. When family members gather at their patriarch’s Mississippi Delta plantation on a hot summer night to celebrate his 65th birthday, they hide the truth about his diagnosis from him and Big Mama in their scramble to secure their part of the estate, pushing truth and lies to the brink.

Rebecca Mozo whip-snapped the evening at the first moment driving the first-act pacing quite impressively as it was nearly a monologue devoted to her character. A bit wound in the beginning Mozo evolved her intensity throughout the show to a smoldering keel and precarious final predicament that Maggie the Cat is determined to overcome – but for love or money, no one is entirely sure. A delicious complexity handed to the audience for a not-necessarily triumphant outcome.

Stand-out Harry Groener as Big Daddy nearly ‘blew the house down’ and yet there was so much quiet, tragic honesty with actor Ross Philips (Brick) when the father and son finally confront what’s causing Brick’s terrible sorrow couched in indifference as well as Big Daddy’s reflections about mortality. Indeed, as Philips as Brick also evolves and in relationship to Big Daddy, we begin to identify them as the same man, albeit Brick a bit more refined, in many ways and understand the regard in which one respectively holds the other.

None of the cast should be underrated here. Everyone plays their part so perfectly including the children.

Mendacity is the winner take all.

True creative inspiration however, is being generated from this production’s set design which, according to director Cameron Watson during his celebratory post show speach, was a vision that began on a yellow pad, to which everyone in the company shared and helped construct right down to the building of the new stage itself.  And it’s a wonder.

Everything about the set which deliberately skews perspective in the third act, subtly captures a progressive crumbling of the house and the relationships from Steven C. Kemp’s scenic design, Jared A. Sayeg lighting design, Jeff Gardner’s sound design and Erin Walley’s props.

Extra kudos to Terri A. Lewis for beautifully orchestrated costumes, dialect coach Tracy Winters and assistant director Portia Juliette and production stage manager Kristin Weber, with whom none of this could have been entirely accomplished.

The entire evening was well-deserved inauguration of a new chapter for the Antaeus Theatre Company.  Cat on a Hot Tin Roof opened the newly completed Kiki & David Gindler Performing Arts Center, the company’s impressive new home in the City of Glendale.