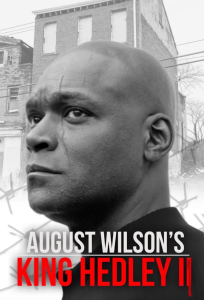 It was messy, noisy, violent, loud, ambitious and a little bit like getting hit in the head over and over. The kind of experience that leaves one dumbstruck after it’s done.  Even if you know or sense the outcome.  Especially knowing it’s heading for disaster. But for King Hedley, that’s the stuff that dreams are made of. And that makes it realer, more vibrant, more terrible.

August Wilson’s King Hedley II (now closed at the Matrix Theatre), is an urban tragedy, the ninth in a ten-play cycle, examining African-American life in the 20th century. A powerfully heady play, filled with the heavy illusion that a man and a dream can achieve anything, the story is the struggle of an ex-con trying to rebuild his life by selling refrigerators for cash in order to eventually open a video store. It is set in the 1980s Reagan era which by now has a sort of throwback feeling since first being produced in 1999 at the Pittsburgh Public Theater in Pittsburgh, Pennsylvania. (It also later ran on Broadway.)

Right from the start, all odds are against Hedley. His pregnant wife wants an abortion, he is constantly in battle with a mother who seems more estranged and selfish than caring, his partner is always looking for an easier, grayer path, a former lover of his mother and a superior con artist who shows up to put more than a monkey wrench in Hedley’s plan for redemption and finally the old coot prognosticator that keeps foreshadowing dread. Add in the general African-American familiarity of the times…the deck is unfavorably stacked. (A guy just can’t win!)

It’s been said that King Hedley II is, in Wilson fashion, typically over-written, but yet, the dense ideas and verbiage are extremely necessary in order to express the narrative and the characters who reside in it. The truth is, we are listening to the mind of and watching a man, Hedley, in desperate hope to be better but in conflict externally with others and internally. Hedley attempts to keep his compass and make good, but unable to overcome the obstacles, loses. Even the plants he is trying to grow, get trampled – a keen metaphor for a man reaching for life. In other words, yes, the dialog reflects the state of affairs, exhausting as it is.

There are some blank spots in this production which cannot be helped by what truly were incredibly heavy-hitting, outstanding performances by the entire cast, Jon Chaffin, Ciera Payton, Abdul Salaam El Razzac, Montae Russell, Ella Joyce and especially Esau Prichett, as Hedley who is a charismatic driving lead. King Hedley II is a sort of continuation of Wilson’s earlier play, Seven Guitars, in which some of the characters appear. And indeed, the story line feels caught in middle, hovering between what we go along with and what we feel we really should know more about.