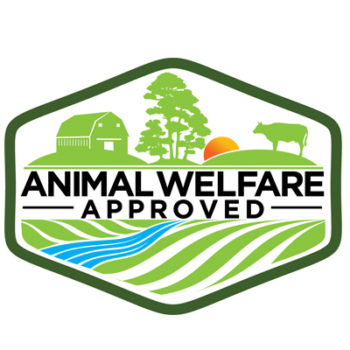 One of AGW’s growing family of leading food labels, Animal Welfare Approved was launched in 2006 as a market-based solution to growing consumer demand for high-welfare, environmentally sustainable meat, eggs and dairy products. In late 2016, AGW learned that the license for its former Animal Welfare Approved logo would not be renewed, and embarked upon a strategic campaign to launch a new logo to effectively communicate the wider benefits of Animal Welfare Approved farming and ranching.

The rise in misleading label claims, the continued weakness of organic livestock and poultry standards, and an anticipated trend of deregulation underscores the important role of independent third-party certifications like Animal Welfare Approved in ensuring high-welfare, pasture-based management.

More than a welfare certification, Animal Welfare Approved (AWA) remains the only label in the marketplace to ensure the following:

“When we take care of our people, our animals and our land, we achieve true sustainability. As the only completely pasture-based program in North America, we kept hearing loud and clear that there was a need for our logo to reflect the full, holistic picture of AWA, animal-centered farms and their benefits to the wider community and society as a whole. This was the perfect opportunity to launch a new logo that better reflects our program’s ethos of transparency and true sustainability. With Animal Welfare Approved, what you see is what you get–and what you get is pretty amazing.”
~AGW Director of Outreach Emily Moose

The new logo will be available in French and Spanish, with plans to translate AWA standards accordingly. Certified parties will transition to the new logo in the coming months, and A Greener World is offering a professional labeling support service to maximize the benefits of the new logo.