The Tragedy of JFK is a Triumph for Daniel Henning 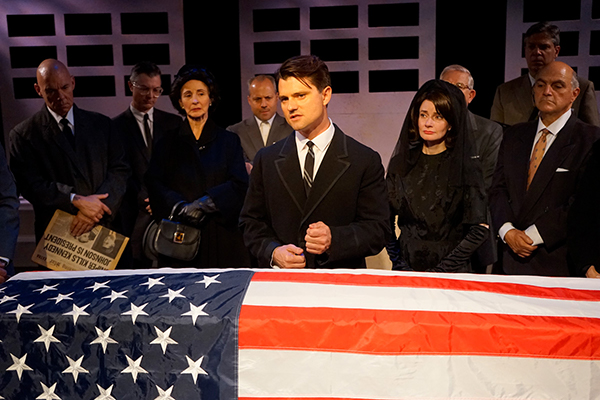 “Are you ready for this?” is the question audiences should ask themselves before stepping into the conspiracy-theory world of writer/director Daniel Henning (Blank Theatre) and…William Shakespeare.

The Tragedy of JFK (as told by Wm. Shakespeare) conceived, adapted and directed by Henning, is not ordinary. It is not the Camelot story the public has fantasized about, decade after decade. It is a penetrating, amalgamation of hard-core Julius Caesar and recognizably other Shakespeare plays freshly whipped with clearly defined, present-moment, modern dialog.

So powerful is the orchestration of the language within the script and articulated by the cast, that its resonance defies current propaganda and theory of Shakespearean renovation. For here is an exactitude of writing, meaning and enunciation of the spoken word far beyond pablum. It is simply impossible NOT to hear or understand a single phrase of the text or a single moment of this production!

The Tragedy of JFK (as told by Wm. Shakespeare) is the what-might-have-happened tale of the conspiracy to assassinate the 35th President of the United States, one of the most shocking events in American history.

As an insider conversation, it is full of closed-door colloquy & subversion, and public bravado, keenly speculating into the hearts and minds of 17 familiar historical participants who played a role in the trifecta assassinations of John Fitzgerald Kennedy, Martin Luther King and Robert Francis Kennedy.

Daniel Henning has produced a powerful and 100% immersive script that is worthy of its talent.

Photo (above): Chad Brannon (at coffin) and the cast of The Blank Theatre’s world premiere production of The Tragedy of JFK (as told by WM. Shakespeare at the Skylight Theatre