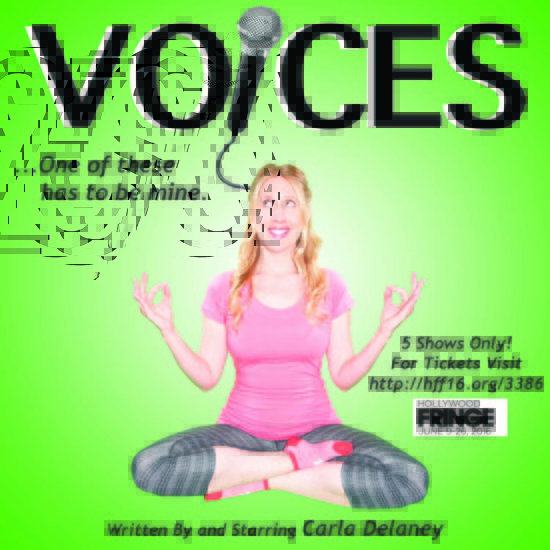 Carla Delaney wrote her own one-person show, Voices, as a birthday present to herself. Blow out the candles, Carla. Your wish has come true.

Delaney is in search of her unique voice, or voices. Contextually, she’s a professional voice artist, in real life; not just this show. In the opening, she displays remarkable talent by effortlessly conjuring the voices of Betty White, Bart Simpson and other pop culture icons. The rest of the hour morphs into a coming-of-age, or voice, marathon as Delaney shifts into characters from her life. These include, but are not limited to: Ex boyfriends, family members and a French horn.

With one-person shows, the convention of switching between character to character is trite and expected. With Voices however, it feels grounded because of the performer’s career; rather than the whole show coming off as a parlor trick. I can only imagine what a force in the making Delaney could be if she was working with better material. This script is a great effort, but as an audience I was lost more often than not. I was trying to find a message, some theme, rather than self-exploration; but it never came.

Overall, Delaney is a burning nova of energy waiting to burst and Voices, while entertaining is in need of a second look by a comedy writer to tighten up the sequences.